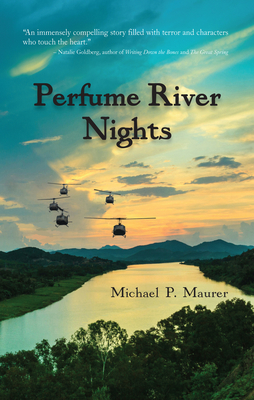 When a teenage boy sets out to prove his bravery, he becomes trapped in an ordeal of survival and ignites a struggle with darkness from which he might never escape. In Perfume River Nights, eighteen-year-old Jimmy Miller, called Singer by his platoon mates, wants to confirm his courage in the trials of war, but he never considered how hard it would be to kill a man or what might happen if he did. He doesn’t think about death and dying. He only imagines the glory. But when a vicious North Vietnamese Army ambush engulfs Singer and his friends, everything changes. In the heat of battle, Singer confronts the terrible truth of war and discovers a frightening darkness within himself. His struggle to survive takes on a deeper meaning that tests his courage in ways he never expected. More than a war story, Perfume River Nights is a tale of tragic events and the heroic quest to know ourselves and find our way.

Michael P. Maurer is a decorated Vietnam combat veteran. At the age of seventeen, he enlisted in the army paratroopers and served in Vietnam in 1968-1969 as an infantryman with the 82nd Airborne Division. A University of Minnesota graduate, he moved to Vietnam in 2003 and lived in Asia until 2012. He currently lives in Minnesota. Visit Michael at www.michaelpmaurer.com.
Loading...
or
Not Currently Available for Direct Purchase