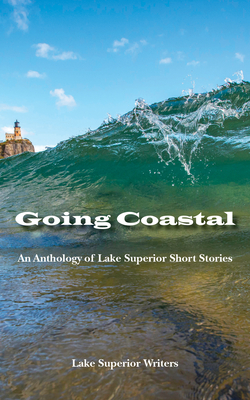 Lake Superior—its people and places—feature in this anthology of short stories by nine writers from Minnesota and Wisconsin.

The power of stories lures an aging man on a road trip back home, north on Highway 61. Through her painting of a river, an Ojibway woman teaches a historian about himself and her culture’s connections to the land and water. A woman confronts a suicidal man on Stoney Point, led by the mystical power of water to magnify her psychic abilities. Another woman finds meaning in the intricate curves and fiery bands of an agate. A shoreline boulder offers its magical views on human life. A ship captain from long ago faces a coldwater death in Whitefish Bay. Life comes full circle in the currents of the lake for a young man from Two Harbors. A ghostly fur trapper haunts Madeline Island. A family’s powerful saga unfolds on the shores of Lake Superior.

Phil Fitzpatrick is a retired English teacher who lives in Duluth with his black rescue dog also named Cisco. He guided canoe trips in the BWCAW in the 60s, spent four years in the education department at the Minnesota Historical Society during the time of the Quincentennial, and has taught all ages of learners, preschool through adult. There are still boxes of his first and only publication, A Beautiful Friendship: The Joy of Chasing Bogey Golf, on his front porch.

Evan Sasman became a writer when he nearly died in a farm accident at age twelve. He discovered he had a lot to express and needed a way to express it.

He began by writing poetry and published a handful of poems in high school anthologies. He went on to a career in journalism and was recognized by the Wisconsin Newspaper Association with awards for Best Feature Story and Best Investigative News Story. He has often written about Native American issues. He worked for the Bad River Band, Lake Superior Ojibway Tribe for ten years as a teacher and journalist. The story, “The Painting,” is based on Ojibway culture. His book, Equilibrium, is a work of fiction based on the 1996 Ojibway railroad blockade on the Bad River Reservation in Wisconsin.

His late wife’s ashes are scattered in the Chequamegon National Forest, near Lake Superior.

Marie Zhuikov is a novelist, poet and science writer from Duluth, Minn. Her poems have appeared in several anthologies and community projects. She’s written two eco-mystic romance novels set on Lake Superior and published by North Star Press: Eye of the Wolf (2011) and Plover Landing (2014). Plover Landing was nominated for a Northeastern Minnesota Book Award. Zhuikov has a BA in science journalism and an MA in public health journalism. She currently works as a science communicator for the University of Wisconsin Sea Grant Program in Superior, Wis. This is her first short story. Visit marieZwrites.com to learn more.

Johnna Suihkonen says "What a Fire Weighs” is an interpretation—literal and metaphorical—of her experiences in the Northwoods of Minnesota. She has spent the last eight years living in Duluth and Ely, Minn. During this time, Lake Superior has been a continuous source of inspiration and the place where her soul resides. She is currently a middle school English Language Arts teacher in Ely. When she’s not teaching, she enjoys camping, hiking, photography, drawing and writing (in many forms).

Theresa Allison-Price grew up in a small town near Eau Clair, Wis., and has spent most of her adult life in the Duluth area. She has a degree in anthropology from the University of Minnesota Duluth and is a certified veterinary technician, but what she always wanted to do is write fiction. At twenty-nine years old, this is her first published piece and she hopes there will be many more.

Maxwell Reagan spent his first eighteen years in the suburbs of St. Paul, Minn. After graduating high school in 2013, Max attended college at the University of Minnesota Duluth. Now going into his senior year, he hopes to graduate in the spring of 2017 as a bachelor of English with minors in journalism and film studies in hopes of one day pursuing a career in professional writing. This is his first publication.

Eric “Shmo” Chandler is a husband and father who cross-country skis as fast as he can in Duluth, Minn. His work has appeared in Sleet Magazine, The Talking Stick, O-Dark-Thirty, Aqueous Magazine, Great Lakes Review, Grey Sparrow Journal, and Northern Wilds, to name a few. Visit ericchandler.wordpress.com to read his published fiction, nonfiction, books, and poetry.

James Brakken writes from his home in Wisconsin’s Bayfield County. His novel, The Treasure of Namakagon, features a boy in an 1883 northern Wisconsin lumber camp and a legendary lost silver mine. The suspicious 1886 death of Chief Namakagon and the 1846 disappearance of a murder fugitive led to two more in the award-winning Chief Namakagon trilogy.

Judy Budreau is a writer and teacher. Her work includes thirty years of helping people tell their stories, and her writing appears in a variety of regional and national media, as well as obscure literary journals. She lives in Duluth, Minn., with her partner, a scientist—he is certain that physics explains the world; she is fairly sure it’s poetry. They have interesting dinner conversations. Learn more at www.judybudreau.com.