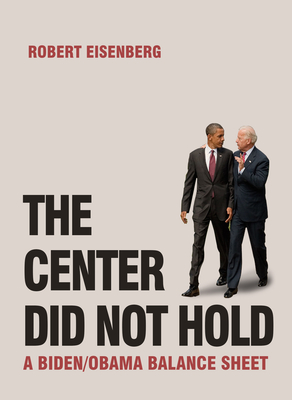 The Center Did Not Hold

With Joe Biden stepping back into the national scene, the time is ripe for a close assessment of the administration in which he served as vice-president.

The Center Did Not Hold weighs the progressive--and not so progressive--contributions of the Obama-Biden White House across more than a hundred issues involving international relations, domestic cultural and economic matters, and social justice.

While Obama and Biden campaigned in the early 2000s on a host of progressive promises, Eisenberg's meticulous accounting shows that, over eight years, they failed to achieve any substantial, lasting change to that end, instead perpetuating a tradition of cautious centrism.

Among the disappointments, the former president and vice-president reneged on environmental promises, pandered to lobbyists, prosecuted a record number of whistle-blowers, and failed to implement the simplest of financial reforms in response to the 2008 crisis. Under Biden's trademark "counterterrorism plus" strategy, they oversaw tens of thousands of civilian deaths in Afghanistan, and escalated violence in the Middle East.

Robert Mark Eisenberg, born and raised in Omaha, received a BA in political science from Columbia University and an MA in government from Harvard. He earned a law degree from Creighton University, where he later served as a professor. He has also lectured at Harvard and the University of Nebraska. Eisenberg is the author of Boychiks in the Hood, an exploration of contemporary Hasidic culture, described by the New York Times Sunday Book Review as "a rich collection of anecdotes, religious history and thumbnail portraits." He currently resides in New York City.
Loading...
or support indie stores by buying on