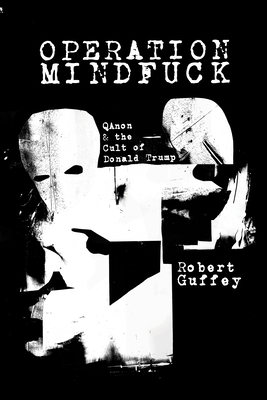 Qanon and the Cult of Donald Trump

This surreal combination of horror-movie shocks and fascist marching orders is the signature of QAnon, which emerged from the dark corners of the internet in 2017 and soon became the galvanizing force behind Trump supporters, both during Trump's presidency and in the volatile, ongoing aftermath of the 2020 election. But despite the strange pervasiveness of QAnon, its origins remain obscure. Who is behind QAnon's messaging, and what do they want? And why do they pair their extreme political agenda with such obviously made-up, phantasmagorical beliefs?

In Operation Mindfuck, Robert Guffey argues that this is not as mysterious as QAnon's anonymous "drops" of cryptic directives seem to be. Drawing on an encyclopedic knowledge of conspiracy theories and mixing deep-dive research, political analysis, and firsthand notes from QAnon's underbelly, Guffey insists that we've seen it all before.

Unraveling QAnon's patchwork quilt of recycled material, from pulp-fiction spook stories to Hunter S. Thompson-style pranksterism to Nixon-esque dirty tricks, Guffey diagnoses QAnon as a highly engineered ploy, calibrated to capture the attention and lock-step loyalty of its audience. Will its followers ever realize that they've been had? Can this new American religion be dispelled as a cult like any other? The answers, Operation Mindfuck reveals, are hidden in plain sight.