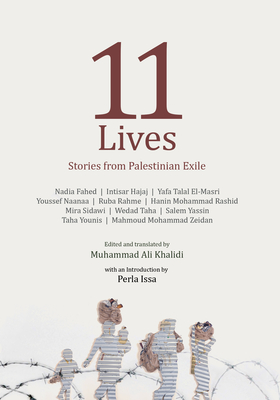 Written by the refugees themselves, this highly original anthology of Palestinians forced to live outside their homeland brings together stories of what it means to be exiled, reflections on the events that led to being displaced, and the raw experience of daily life in a camp.

The 11 lives given voice here are unique, each an expression of the myriad displacements that war and occupation have forced upon Palestinians since the Nakba of 1948. At the same time, they form a collective testament of a people driven from their homes and land by colonial occupation. Each story is singular; and each tells the story of all Palestinians.

As Edward Said argued in 1984, the object of Israel's colonial warfare is not only material--seeking to minimise Palestinian existence as such--but is also a narrative project that aims to obliterate Palestinian history "as possessed of a coherent narrative direction pointed towards self-determination."

In these pages, Palestinian refugees narrate their own histories. The product of a creative-writing workshop organized by the Institute for Palestine Studies in Lebanon, 11 Lives tells of children's adventures in the alleyways of refugee camps, of teenage martyrs and ghosts next-door, of an UNRWA teacher's dismay at the shallowness of her colleagues, and of the love, labour, and land that form the threads of a red keffiyeh.

What unites these 11 stories is "the inadmissible existence of the Palestinian people" highlighted by Said. Their words persist, as one contributor writes, "between the Nakba and the Naksa, throughout defeats and massacres, love affairs and revolutions." The stories of Palestinians in exile are also open-ended, and will continue to reverberate across borders until Palestine is free.

Co-published with the Institute of Palestine Studies.

Muhammad Ali Khalidi is Presidential Professor of Philosophy at CUNY Graduate Center, where he teaches and publishes mainly in the philosophy of science, especially cognitive science. He also does research on Arabic-Islamic philosophy from the classical period. In addition, he has written on various aspects of the question of Palestine, including Palestinian refugee rights, the ethics of war, the right of political self-determination, and the ethics of boycott. His edited volume, Manifestations of Identity: The Lived Reality of Palestinian Refugees in Lebanon, was published by the Institute of Palestine Studies in 2010. He has translated a wide range of texts from Arabic into English, notably the collection, Medieval Islamic Philosophical Writings (Cambridge University Press, 2005). He holds a PhD in Philosophy from Columbia University and a BS in Physics from the American University of Beirut. He was born in Lebanon to a Lebanese mother and a Palestinian father.
Loading...
or support indie stores by buying on