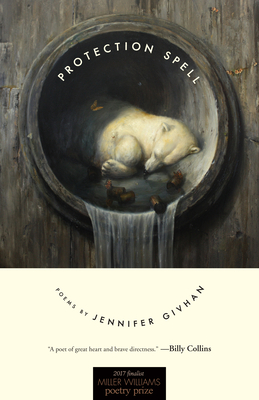 “A poet of great heart and brave directness.”

In Protection Spell Jennifer Givhan explores the guilt, sadness, and freedom of relationships: the sticky love that keeps us hanging on for no reason other than love, the inky place that asks us to continue revising and reimagining, tying ourselves to this life and to each other despite the pain (or perhaps because of it). These poems reassemble safe spaces from the fissures cleaving the speaker’s own biracial home and act as witnesses speaking to the racial iniquity of our broader social landscape as well as to the precarious standpoint of a mother-woman of color whose body lies vulnerable to trauma and abuse. From insistent moments of bravery, a collection of poems arises that asks the impossible, like the childhood chant that palliates suffering by demanding nothing less than magical healing: sana sana colita de rana, si no sanas hoy, sanas mañana (the frog who loses his tail is commanded to grow another). In the end, Givhan’s verse offers a place where healing may begin.

“Among the several poems in Jennifer Givhan’s Protection Spell that stopped me cold is ‘The Polar Bear,’ in which a mother tries to protect her black child from the television news of racial unrest (riots, arrests, brutality) by turning his attention to The Discovery Channel. But there, a polar bear is fighting for survival surrounded by vicious walruses and melting ice. The boy clutches his stuffed white bear and asks if this is real. Life in the Arctic and life in the urban streets are conjoined, ecology and racism wed. Givhan is a poet of great heart and brave directness who writes real-life poems, sometimes crowded to the point of claustrophobia with the details of life in the poor lane. One poem transforms a laundromat woman living ‘paycheck to paycheck’ into a ‘god.’ Another poem is a stirring defense of cheerleaders, written without a drop of irony. A reader will be quick to trust the authority in this poet’s voice and the credentials of experience which are on full display.”

“In a second collection that beats with multiple hearts, Givhan (Landscape with Headless Mama) addresses complicated familial identity, writing of her own Mexican-American background, her mixed-race husband, and their adopted black child. The book is full of anxiety over the vulnerability of children, specifically her own child’s identity and how she can protect him. Givhan writes of the initial apprehension, “after the gauge of my uterus/ had fixed itself on empty.// I’d made peace with the threat of/ you’re not my ‘real’ mother.” She also confronts the racism embedded in the adoption process: how the “white ones cost ten grand more.” Throughout, Givhan exposes the enduring animosity and aggression towards biracial families, doing so with candor and sparkling language. Every line is tightly composed, and the sensory details pull the reader towards the poet as she recounts her splintered world—her past as well as the present world she creates and navigates as a woman and a mother of color. Chronicling the cruelty that children endure at the hands of adults, Givhan casts the eponymous spell for her son and her family. Givhan asks readers to witness racial inequity beside her and imagine a better future—how, we, too, have the power to cast a spell so that every human feels secure, safe, protected.”

“Protection spells typically deal with force and looking out for one’s self and others, two themes consistently at work in Jennifer Givhan’s Protection Spell. Whether it is standing one’s ground regarding family, as in the sequence of poems dealing with a neighbor’s racially-charged accusations against the speaker’s husband, or empathizing with and speaking in the voices of figures past and present who have survived physical and cultural violence, the poems in this collection are alive with the complexity of wanting to protect while needing to be protected as well. These are poems that engage human experience beyond the binary of aggression and passivity, and reflect a world where the two sides blur.”

“The maternal instinct is a complicated emotional experience for a Latina in an interracial marriage and raising an adopted black son. Givhan’s heartfelt poems don’t come across as sentimental because her angst is expressed through the unsettling truths about the racism in today’s America that her partner faces and that her son will undoubtedly encounter. Channeling her inner healer and her inner bruja, the speaker offers words as solace and safety, knowing this doesn’t always guarantee an uneventful homecoming, “the boy on the street, his too-large cowboy boots/ forever walking home toward his mama. His mama/ forever on the porch, searching the skyline for a hat.” This moving and sometimes painful book of poems in nonetheless filled with positive light and hope.”

“The poems in Protection Spell feel like the music of an Aeolian harp specially tuned to catch the winds of trauma and tragedy—and the intense commitments made by love. Jennifer Givhan knows that to be a mother, spouse, Latina, American, teacher, writer, human being is necessarily to be political. She has a gift for making poem-spaces where story can meet song—detailed, dynamic, sometimes desperate, always gorgeous.”
—Daisy Fried

“In her brilliant second collection, Jenn Givhan gives us poems that both balm and break the heart. In an age when much of what passes for poetry leans toward obfuscation, Givhan provides us with what is truly difficult: an honest account of who and what we are, individually and collectively. In language that is at turns both lyrical and colloquial, Jenn Givhan’s Protection Spell ‘can’t resist telling . . . what darkness will come, what light.’”
—John Murillo


“Jennifer Givhan’s Protection Spell is an aegis for re-membering, for piecing back together trauma-fractured selves and communities that are displaced in space and time. Givhan interrogates history with lyrical revisions beneath which misogyny, racism, and poverty kneel to a new prayer: ‘Prayer for two or more gathered// in prayer, for shuteye, for danger, for rust.’ No one is safe alone, and Givhan has given us a complex song to accompany us in this world.”
—Phillip B. Williams

“There’s a powerful magic in Jennifer Givhan’s Protection Spell, one that offers a lyrical and unflinching look at motherhood and America, at race and history, the cultural collisions that pry us open and ‘the dark / matter holding us together.’ These are fearless, unforgettable poems.”
—Matthew Olzmann

“Jennifer Givhan is an astonishing poet. In her second book, beautifully built lines dovetail into stanzas that reveal how mothering brings the self closer to both beauty and terror and how the self navigates the minefields of identity and home. Givhan’s explorations are acrobatic, lyrical, and ravishing. Protection Spell is a searing and vital book.”
—Eduardo C. Corral

Jennifer Givhan is the author of Landscape with Headless Mama and the poetry editor at Tinderbox Poetry Journal. She lives in New Mexico and teaches at the Poetry Barn.
Loading...
or
Not Currently Available for Direct Purchase