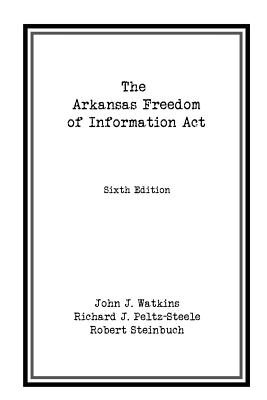 The Arkansas Freedom of Information Act

Since its first edition in 1988, The Arkansas Freedom of Information Act has become the standard reference for the bench, the bar, and journalists for guidance in interpreting and applying the state’s open-government law. This sixth edition, published fifty years after the passage of the Act in 1967, builds upon its predecessors, incorporating later legislative enactments, judicial decisions, and Attorney General’s opinions to present a synthesis of the law of access to public records and meetings in Arkansas.

John J. Watkins is Emeritus Professor of Law at the University of Arkansas School of Law. He has written extensively on issues of Arkansas law and has been honored by the Arkansas Bar Association for “distinguished service to the legal profession.”

Richard J. Peltz-Steele is Professor of Law at the University of Massachusetts School of Law and the author of books on freedom of information law and the law of torts. Among his other publications are articles in foreign journals on issues of international media law and policy.

Robert Steinbuch is Professor of Law at the William H. Bowen School of Law, University of Arkansas at Little Rock. A former lawyer at the U.S. Department of Justice, he has published widely in professional journals and testified before committees of the U.S. Congress and Arkansas General Assembly.