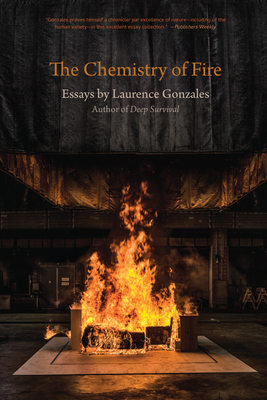 The Chemistry of Fire

In 1989, Laurence Gonzales was a young writer with his first book of essays, The Still Point, just published by the University of Arkansas Press. Imagine his surprise, one winter day, to receive a letter from none other than Kurt Vonnegut. “The excellence of your writing and the depth of your reporting saddened me, in a way,” Vonnegut wrote, “reminding me yet again what a tiny voice facts and reason have in this era of wrap-around, mega-decibel rock-and-roll.”

Several books, many articles, and a growing list of awards later, Gonzales -- known for taking us to enthralling extremes – is still writing with excellence and depth. In this latest collection, we go from the top of Mount Washington and ”the worst weather in the world,” to 12,000 feet beneath the ocean, where a Naval Intelligence Officer discovers the Titanic using the government’s own spy equipment. We experience night assaults with the 82nd Airborne Division, the dynamiting of the 100-foot snowpack on Going-to-the-Sun Road in Glacier National Park, a trip to the International Space Station, the crash of an airliner to the bottom of the Everglades, and more.

The University of Arkansas Press is proud to bring these stories to a new era, stories that, as with all of Gonzales’s work, “fairly sing with a voice all their own.” (Chicago Sun-Times)


Praise For The Chemistry of Fire: Essays…

“Gonzales travels where few people might want to go, and he brings back wondrous tales.”
—Kirkus Reviews


“Reflective essays explore what it means to be human. Whether he’s swimming in an underwater cave or touring a NASA center in Huntsville, Alabama, ‘a kind of hillbilly heaven,’ these savvy essays are a pleasure. An appealing collection about all the “rough and joyful realities” of life.”
—Kirkus Reviews, August 2020

“The topics of the essays collected here range from mountain climbing to deep-sea exploration,outer space, and the loss of loved ones, and each treats the reader to an amazing alchemy of wordsmithing as Gonzales creates magic in prose. … The Chemistry of Fire is a whirlwind of observation, knowledge, and expression.”
—James Pekoll, Booklist, November 2020

Laurence Gonzales is the author of numerous books, including the best-selling Deep Survival: Who Lives, Who Dies, and Why. He has won two National Magazine Awards and the Distinguished Service Award from the Society of Professional Journalists. He was an appointed scholar at the Santa Fe Institute from 2016 to 2020. He lives in Evanston, Illinois.