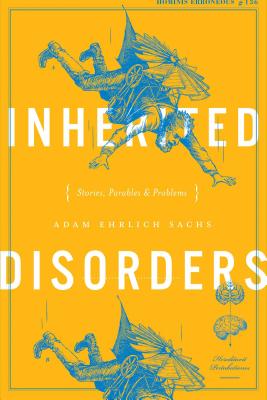 A son receives an inheritance from his father and tries to dispose of it before it destroys him. Inherited Disorders tells this elemental story in over 100 hilarious, witty variations. Adam Ehrlich Sachs's Inherited Disorders is a rueful, absurd, and endlessly entertaining look at a most serious subject--the eternally vexed relations between fathers and sons. In a hundred and seventeen shrewd, surreal vignettes, Sachs lays bare the petty rivalries, thwarted affection, and mutual bafflement that have characterized the filial bond since the days of Davidic kings. A philosopher's son kills his father and explains his aphorisms to death. A father bequeaths to his son his jacket, deodorant, and political beliefs. England's most famous medium becomes possessed by the spirit of his skeptical father--who questions, in front of the nation, his son's choice of career. A Czech pianist amputates his fingers one by one to thwart his father, who will not stop composing concertos for him. A nineteenth-century Italian nobleman wills his ill-conceived flying contraption--incapable of actual flight--to his newborn son. In West Hollywood, an aspiring screenwriter must contend with the judgmental visage of his father, a respected public intellectual whose frozen head, clearly disappointed in him, he keeps in his freezer. Keenly inventive, but painfully familiar, these surprisingly tender stories signal the arrival of a brilliant new comic voice--and fresh hope for fathers and sons the world over.

Adam Ehrlich Sachs studied atmospheric science at Harvard, where he wrote for the Harvard Lampoon. His fiction has appeared in The New Yorker, n+1 and McSweeney's, among other places. He lives with his wife in Somerville, Massachusetts.
Loading...
or
Not Currently Available for Direct Purchase