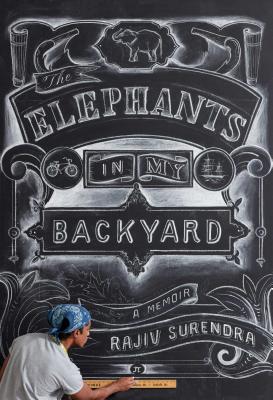 The Elephants in My Backyard

“While filming Mean Girls in 2003, actor Rajiv Surendra is told by the cameraman that he must read Life of Pi because he is Pi. As he reads the novel, Surendra is amazed at the similarities that he discovers between himself and Pi -- both live by a zoo, are the same height, and share a similar heritage. Realizing that the book is to be made into a movie, Surendra embarks on a personal journey to win the lead in the film. Along the way, he shares his own epic quest of self-discovery as he experiences exhilaration, disappointment, failure, and love, offering an intimate view of his journey.”
— Fran Keilty (M), Hickory Stick Bookshop, Washington Depot, CT
View the List

“This was a once-in-a-lifetime chance. I found myself standing dangerously close to the edge of a cliff. Far below me was an incredible abyss with no end in sight. I could turn back and safely return to where I had come from, or I could throw caution to the wind, lift my arms up into the air . . . and jump.” —From The Elephants in My Backyard

What happens when you spend ten years obsessively pursuing a dream, and then, in the blink of an eye, you learn that you have failed, that the dream will not come true?

Mesmerized by all the similarities between Pi and himself—both are five-foot-five with coffee-colored complexions, both share a South Indian culture, both lived by a zoo—when Rajiv learns that Life of Pi will be made into a major motion picture he is convinced that playing the title role is his destiny.

In a great leap of faith Rajiv embarks on a quest to embody the sixteen-year-old Tamil schoolboy. He quits university and buys a one-way ticket from Toronto to South India. He visits the sacred stone temples of Pondicherry, he travels to the frigid waters off the coast of rural Maine, and explores the cobbled streets of Munich. He befriends Yann Martel, a priest, a castaway, an eccentric old woman, and a pack of Tamil schoolboys. He learns how to swim, to spin wool, to keep bees, and to look a tiger in the eye. All the while he is really learning how to dream big, to fail, to survive, to love, and to become who he truly is.

Rajiv Surendra captures the uncertainty, heartache, and joy of finding ones place in the world with sly humor and refreshing honesty. The Elephants in My Backyard is not a journey of goals and victories, but a story of process and determination. It is a spellbinding and profound book for anyone who has ever failed at something and had to find a new path through life.

Praise For The Elephants in My Backyard: A Memoir…

"Lovely and human. The tale of a man who began by following a story and ended up creating his own."

". . . Imaginative, diversion-full, and refreshingly green memoir about the surprises that living a creative life can offer."

"A beautifully written journey of self-discovery, The Elephants In My Backyard is intimate, moving, hilarious and painful. This quirky memoir unfolds in a series of anecdotes—miniature gems—much like the intricate chalk designs that are one of Rajiv Surendra's many talents."

— Anosh Irani, author of The Parcel

Rajiv Surendra is a modern-day renaissance man: he's a painter, a potter, woodworker and calligrapher. He's also an actor and is best known for his performance as the rapping mathlete, Kevin Gnapoor, in Mean Girls. The son of Tamil immigrants to Canada, Rajiv was born and raised in Toronto and holds a bachelor's degree in art history and classics from the University of Toronto. Today he lives in New York City where he runs his business, Letters In Ink, while continuing to pursue a multifaceted career in the arts.
Loading...
or
Not Currently Available for Direct Purchase