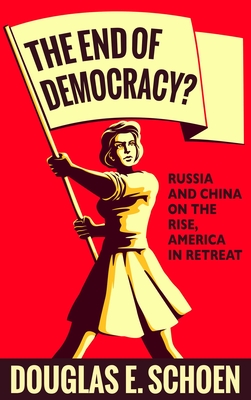 The End of Democracy?

Russia and China on the Rise, America in Retreat

WARNING: IMMEDIATE GLOBAL THREAT TO ALL DEMOCRATIC NATIONS BY THE CHINA-RUSSIA AXIS

America’s future has never seemed more uncertain. Our politics are dysfunctional; our cultural cohesion is a thing of the past; our institutions have lost legitimacy; and our identity as Americans seems increasingly subordinate to tribal or ideological identities. Overhanging all these issues is a loss of confidence in democracy itself, both in America and around the world, and the concomitant rise of authoritarianism as a viable model of governance in the eyes of millions. At the center of this story are two nations—Russia and China—that together stand as a profound challenge to the American and Western future, and to the future of democracy and human rights around the globe. As America unravels, China and Russia have taken every opportunity to expand their opportunities and consolidate their gains. If the United States is to prevail in this struggle, our efforts must begin with a better understanding of our determined adversaries in Beijing and Moscow—and of how their successes have emboldened the cause of authoritarianism around the world, to the detriment of free societies and free people.

“A remarkably comprehensive analysis of the challenges—internal and external—that we face today. Schoen is able to write intelligently about domestic and international issues alike, weaving them into one worrisome picture of the world… Well worth reading.”
—Fareed Zakaria, CNN host and author of The Post-American World

“Peace and security are deteriorating across Europe not only because of the heightened terrorist threat, but also because of a toxic mix of Russian belligerence and NATO weakness. In this timely analysis, Douglas Schoen argues convincingly that American leadership remains key to peace in Europe, as it has for over seventy years.”
—John Bolton, Former National Security Advisor and bestselling author of The Room Where It Happened

America in the Age of Trump

"… a terrific read, engaging and richly sourced, a provocative take on big, controversial issues and on political leaders... especially powerful regarding the loss of trust in institutions… it will challenge you to think critically about your own views and justify your idea of the American future."
—Bob Shrum, Democratic strategist and the Carmen H. and Louis Warschaw Chair in Practical Politics at the University of Southern California

Douglas Schoen has been one of the most influential Democratic campaign consultants for over forty years. A founding partner and former principal strategist for the internationally known polling and consulting firm Penn, Schoen and Berland, he is also a founding partner of Schoen Cooperman Research, and he is widely recognized as one of the innovators of the modern polling and research business.
His political clients include former President Bill Clinton as well as former New York City Mayor Michael Bloomberg. He has worked for a number of United States senators and governors, in particular former Indiana Senator and Governor Evan Bayh, and a number of leading American corporations including Time Warner, Procter & Gamble and AT&T. Internationally, he has worked for the heads of states of over 15 countries, including British Prime Minister Tony Blair, Italian Prime Minister Silvio Berlusconi, and Israeli Prime Minister Menachem Begin.
He is the author of multiple books including Putin’s Master Plan:To Destroy Europe, Divide NATO, and Restore Russian Power and Global Influence and The Nixon Effect: How Richard Nixon’s Presidency Fundamentally Changed American Politics. In Schoen’s latest book, entitled Putin on the March, he writes about how Russian President Vladimir Putin’s mission to expand Russian influence around the world, destabilize the Western alliance, and delegitimize the very principles of free societies, has pursued with far more successes than setbacks.
Schoen is a regular contributor to the Wall Street Journal, the Washington Post and various other newspaper and online publications. He was a Fox News contributor for over 15 years. Schoen is a graduate of Harvard College, he has a Doctorate of Philosophy in Politics from the University of Oxford, and he is a graduate of Harvard Law School.
or support indie stores by buying on