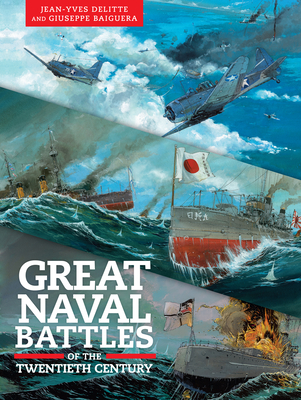 In the history of civilizations, sea power has always played a preponderant role. This symbol of a nation's scientific and military genius has very often been the deciding factor during major conflicts, putting the names of several clashes down into legend. With this collection, Jean-Yves Delitte and Giuseppe Baiguera plunge into the heart of three of the twentieth century's greatest naval battles.
TSUSHIMA. Newly opened to the world, Japan found itself to be weak and subject to the whims of larger nations. What followed was decades of industrialization and modernization as Japan sought to catch up to advanced nations and control its own destiny. In 1905, when Japan's expansionist policies clashed with the Russian Empire over Korea, Japan was poised to flex its muscle and stun the world using the same naval supremacy that opened its borders half a century earlier.
JUTLAND. May 31, 1916: the British Royal Navy and the German Kaiserliche Marine are preparing to confront one another in the North Sea off the Danish coast of Jutland. This will be the final great confrontation of World War I by sea and one of the greatest epic battles in the history of seafaring. Despite heavy losses, which are greater than the Germans', the English reaffirm their naval supremacy over the seas of the world, and Germany, all too conscious of having escaped disaster, will opt to confine the majority of its ships to its ports.
MIDWAY. December 7, 1941: the Empire of Japan strikes an early blow against the United States Navy at Pearl Harbor. In just a matter of hours, the era of the battleship would come to an end and the age of the aircraft carrier would begin. In June 1942, the Imperial Japanese Navy and its carrier fleet would try to seize the initiative again by attacking the island of Midway. What unfolds is an epic carrier duel, the likes of which the world has never seen. In the end, Japan would never recover from the losses at Midway, and the United States would carry this momentum until Japan's ultimate defeat.