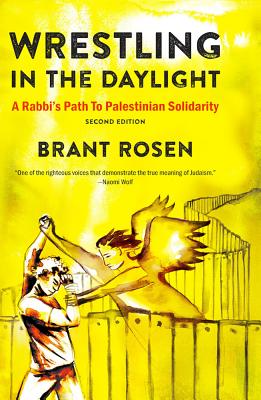 Wrestling in the Daylight (Paperback)

A Rabbi's Path to Palestinian Solidarity

Wrestling in the Daylight is an insightful conversation on Zionism initiated by Rabbi Brant Rosen, a prominent Jewish activist from Chicago, on his social-justice blog Shalom Rav. After Israel’s brutal military attack on Gaza in 2008-2009, Rosen began to question his lifelong Zionist beliefs. Unlike the biblical Jacob, who wrestled with his conscience in the dark of night, Rosen chose to "wrestle in the daylight" with this issue through many thoughtful essays on his blog. In this selection of content from Shalom Rav, Rosen includes both his own posts and those of his online commenters, granting readers unique insight into the largest controversy facing the American Jewish community today. In the new introduction he has written for this second edition, Rosen updates the story of the “wrestling” that both he and the American Jewish community have undertaken in recent years.

Brant Rosen is a rabbi, blogger, and social activist based in Chicago, Illinois, where he currently serves as the Midwest Regional Director for the American Friends Service Committee. In 2014, Rosen co-founded a social-justice focused Jewish congregation called Tzedek Chicago after many years serving as a congregational rabbi in Evanston, IL.

Praise For Wrestling in the Daylight: A Rabbi's Path to Palestinian Solidarity…

"If you want to understand the inner struggle of American Jews about Israel, this is a must read." —Rabbi Michael Lerner, editor, Tikkun magazine.

"Wrestling in the a Daylight is a must read. It offers a unique opportunity for Jews and non-Jews alike to follow the evolution in thinking of a deeply spiritual Jewish rabbi as he breaks with long-cherished beliefs about Zionism, and embraces the liberation of the Palestinians." —Medea Benjamin, author and co-founder, CODEPINK for Peace

"Wrestling in the Daylight is a work of extraordinary moral reckoning from America’s bravest rabbi." —Ben Ehrenreich, author, The Way to the Spring: Life and Death in Palestine

"In Wrestling in the Daylight, Rosen patiently challenges the ways so many in the Jewish community seek to bend Judaism’s liberationist themes to the goal of justifying Israeli repression. His intervention is a revolutionary and prophetic act." —Adam Horowitz, co-editor, Mondoweiss.net

"A heroic rabbi who risked a great deal to stand in solidarity with the people of Palestine and in support of justice and peace in the region; one of the righteous voices that demonstrate the true meaning of Judaism, transcending tribal identities and committed to social justice and human love." —Naomi Wolf, author, social critic and political activist
or
Buy Here
Copyright © 2020 American Booksellers Association