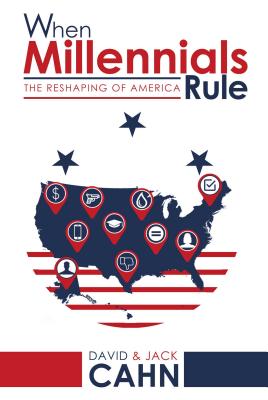 The Reshaping of America

When Millennials Rule offers an optimistic story about how the generation that grew up through 9/11 and the Great Recession will rise above these setbacks to unify around common-sense solutions and take back America’s future.

China has swallowed our jobs. Social security is going bankrupt. Radical Islamic terrorists threaten our safety. Our planet is on the brink of environmental disaster. Meanwhile, politicians pound their chests in ideological wars that enrich lobbyists and special interest groups at the expense of the American voter.

If America today is at a crossroads, it is the millennial generation – long ridiculed as selfish egotists and narcissistic Twitter drones – that will face the momentous task of restoring the promise of a better future.

But where are millennials leading America? How will this generation shape our nation’s future? These are questions everyone is asking – in newspapers, in books, on television and on Twitter. And they’re baffled. The Nation called it “Millennial Madness” and The Atlantic complained that millennial political views “don’t make any sense.”

Five years ago, David and Jack Cahn – identical twins, competitive debaters, and New York magazine’s “Twin Titans” – set out to answer these questions and uncover their generation’s political identity. Traveling across the country, from Kentucky to Illinois to California, they talked with more than 10,000 young Americans about everything from campaign finance reform to nuclear proliferation, Beyoncé and Taylor Swift.

When Millennials Rule is the story of their journey. They start in New Haven, Conn., just months after the Newtown shooting, and end in Philadelphia, where the 2016 Democratic National Convention is set to launch one of the most contentious elections in modern history. Combining thorough reporting with the compelling stories of their peers, the brothers craft an authentic, first-person portrait of what millennials stand for and why.

David Cahn and Jack Cahn are millennial journalists and activists who have been featured in The New York Times, The Wall Street Journal, Time, and New York magazine and have appeared on CBS, Nickelodeon and Al Jazeera’s “America Tonight.” Experts on millennial political beliefs, the twins were nationally ranked debaters between 2010 and 2014 and have served as national leaders of the Junior State of America and as organizers for national and local campaigns. Today, they write for the Huffington Post, where they are accomplished journalists. Jack won Columbia’s Gold Circle Award for News Reporting in 2015 and David received Scholastic’s National Gold Medal for Persuasive Writing in 2014.