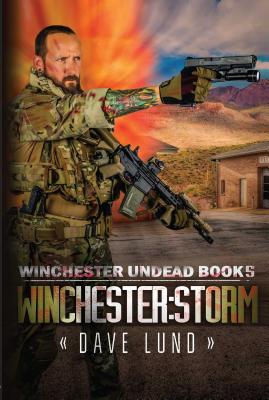 The war with the undead has only begun. Now the last remnants of civilization must fight them—and the evil remnants of humanity itself—to live another day.

Marooned, Bexar and Chivo are trapped in a war between prepper clans in a Utah town.

Hundreds of miles away, Jessie, Sarah, and Erin fight to save a secret underground government facility—the only refuge they and hundreds of others have found—a facility on the verge of collapse.

Crossing the American southwest, a group of Marines are the last survivors of their command. Will they reach the facility in time?

Under attack and on the run, America’s last heroes fight for the future—as the legions of the dead wage their final war against the living.

"If you shook this book, gunpowder and testosterone would fall out." —Chris Philbrook, Author of Adrian's Undead Diary

My name is Dave Lund. I hail from Texas and am a former Texas “motor-cop” with nearly a decade in active law enforcement. My family and photography round out my usual day-to-day passions, but post-apocalyptic zombie stories really fire me up. Before my previous stint as a motor-cop, I was a full-time skydiving instructor and competitor (in Canopy Piloting, aka swooping) with over 3,000 skydives. I am no longer an active skydiver so I can focus on my family, photography, and writing. The characters in the Winchester series comprise some personality composites of people I have known or met in my life, but no character is based on a single real person or even two people combined. They are a complete work of fiction and do not represent any actual people, living or dead. Yes, that includes Bexar! Many of the themes, objects, weapons, tactics, and locations in the Winchester Undead series are pulled from my past and experiences, as many writers are apt to do, including my love of Big Bend National Park in Texas; although I have to admit there is no secret cache site in the small Texas town of Maypearl. At least none that I had any hand in creating. The locations in Big Bend are real locations, with some minor artistic license taken, as are the cities and towns visited throughout the book. The jury is still out on the presence of the secret facilities that “Cliff” finds himself in, and the truthfulness of Chemtrails really depends on whom you speak with. If the writing about Cliff’s found Type 2 VW Transporter sounds a little detailed to those not acquainted with air-cooled VWs, that’s due to my love of air-cooled German autos, including the 1973 Superbeetle that I built and drive.
or
Not Currently Available for Direct Purchase
Copyright © 2020 American Booksellers Association