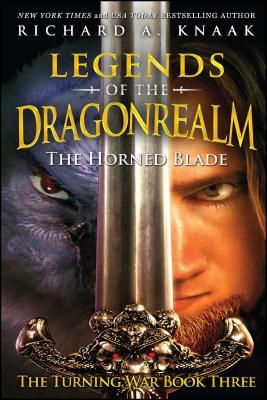 Legends of the Dragonrealm

At long last, the story behind the mage-led rebellion against the rule of the Dragon Kings. The gripping conclusion to The Turning War trilogy!

The Turning War is a three-volume saga that answers many of the questions about the beginnings of the Dragonrealm, the Dragon Masters, and the events that continue to reverberate in the current timeline.

With the rebellion in dire straits, Nathan Bedlam and the Gryphon turn to a desperate spell that may win them the war, but cost them their souls.  But  an even darker threat lurks behind the scenes, an ancient evil whose resurrection is being instigated by none other than Nathan's son, Azran and his sinister creation, a magical blade housing a malevolent mind of its own . . .

Richard A. Knaak is the New York Times and USA Today bestselling author of The Legend of Huma,  WoW: Wolfheart, and nearly fifty other novels and numerous short stories, including works in such series as Warcraft, Diablo, Dragonlance, Age of Conan, the Iron Kingdoms, and his own popular Dragonrealm. He has scripted comics and manga, such as the top-selling Sunwell trilogy, and has also written background material for games. His works have been published worldwide in many languages.

In addition to The Gryphon Mage, his most recent releases include Black City Demon—the second in his new urban fantasy series from Pyr Books, Reaper’s Eye for the Pathfinder series, and a new edition of his novel King of the Grey.   He is presently at work on several other projects, among them Knights of the Frost for The Dragon Throne trilogy for the Dragonrealm,  Black City Dragon—the sequel to Black City Demon—and more.  The Horned Blade, the sequel to The Gryphon Mage, will be released from Permuted Press shortly.