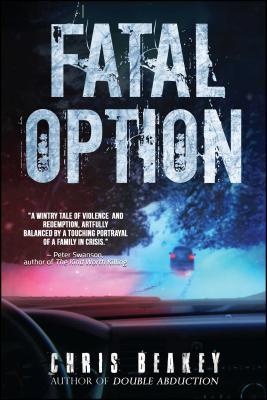 A tragic accident. A family in crisis. And a killer watching every move.

Five months after the mysterious death of his wife, Stephen Porter is pulled from a dreamless sleep by a midnight phone call. His 17-year-old daughter Sara is stranded in a blizzard near the top of a mountain beyond their suburban home. She's terrified and unable to stop crying as she begs him to come to her rescue.

Unfortunately Stephen went to bed just an hour before after a night of binge drinking. With his blurred vision and unsteady balance he knows it’s dangerously irresponsible to get behind the wheel. But he heads out into the snowstorm to bring Sara home.

High school teacher Kieran O’Shea is also behind the wheel, searching for his autistic younger brother Aidan, who is wandering aimlessly through the storm on that same mountain. Kieran is terrified—of the voices in his mind, that Aidan will be taken from him, and that he may soon be arrested for murdering three women.

In a matter of minutes Stephen will encounter Kieran and drive headlong into a collision that will force him to unlock the secret of his wife’s death, avoid prosecution, and protect his children from violence that hits all too close to home.

"The tension starts high in this novel . . . Beakey parallels his thriller plot with an engaging family drama . . . it's all packaged within a taut narrative . . . a character-driven tale that maintains its sincerity, even in its most nerve-wracking moments."
— Kirkus Reviews

"A wintry tale of violence and redemption, artfully balanced by a touching portrayal of a family in crisis."
— Peter Swanson, author of THE KIND WORTH KILLING

“Emotionally visceral. The violence and action sequences really gripped me and I loved the strength of the teenage girl, Sara. I loved the ending too. What subtlety! There's a sense of the world restored but not quite. Not sugar-coated and not expected either. Completely real.”
— Jordan Dane, bestselling author and recipient of Publisher's Weekly Best Book and Readers’ Choice Awards

"A story about the devastating moral consequences of a dangerous choice. Relentlessly suspenseful, with brisk pacing and intrigue on every page."
— Norb Vonnegut, bestselling author of Top Producer and The Trust

"Fatal Option grabs you from the first page as a complex tale about a family in crisis and murder. Plan to stay up late.”
— Kathleen Antrim, Co-President, International Thriller Writers and author of Capital Offense

Chris Beakey tells stories of good people caught in bad places. He writes fiction from his homes in Washington, D.C. and Lewes, Delaware, as well as nonfiction as a ghostwriter for an organization that promotes bipartisan policies that strengthen the nation through smart investments in youth. His first, novel, Double Abduction, was a finalist for the Lambda Literary Award.
Loading...
or
Not Currently Available for Direct Purchase