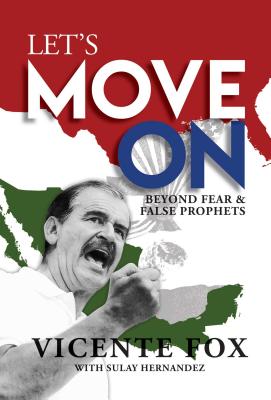 Vicente Fox, the former president of Mexico, issues both a denunciation of the current state of American politics and a call to unity and resistance in the face of rising ethnocentric and anti-democratic sentiments.

Vicente Fox offers his unique viewpoint as a former head of state, avid historian, and true admirer of America’s constitutional ideals. He knows where a Trump presidency can lead—and it is nowhere good. Let’s Move On is a political manifesto written in Fox’s trademark, no-nonsense style where he both denounces Trump’s malignant anti-intellectualism and inspires people to rise up and resist.

“Fox knows America. He gets it. He digs it, its big dreams and weird nightmares. He lays down the chords in the key of the American Dream like a master.”

Vicente Fox was born in Mexico in 1942. Before his election as president of Mexico, he was a rancher, bootmaker, truck driver, Coca-Cola executive, democracy activist, congressman, and a governor of the state of Guanajuato. He lives at the farm his immigrant Ohio grandfather pioneered a century ago. Rancho San Cristobal is home to Mexico’s first presidential library, the Centro Fox academic thinktank for global democracy, and the antipoverty foundation Vamos Mexico, which the president founded with his first lady, Marta.

Praise For Let's Move On: Beyond Fear & False Prophets…

"Fox knows America. He gets it. He digs it, its big dreams and weird nightmares. He lays down the chords in the key of the American Dream like a master."
— The Washington Post

"Fox, who was Mexico's president from 2000 to 2006, is one of [Donald Trump's] most outspoken critics."
— David Kaplan, ABC News
or support indie stores by buying on
Copyright © 2020 American Booksellers Association