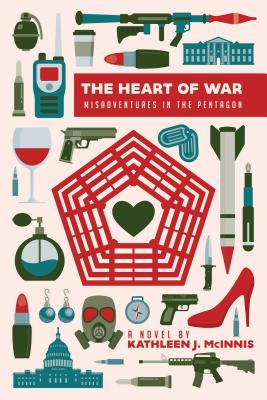 The Heart of War

Misadventures in the Pentagon

Featured in The NY Times magazine!

The Devil Wears Prada meets Catch-22; a novel about a young woman’s journey into the heart of Washington’s war machine.

Dr. Heather Reilly has been an anti-war activist since her brother died fighting the Taliban. But her crushing student loans drive her to take a job working on a peace plan for Afghanistan, in the last place on Earth she ever thought she'd be employed: the Pentagon. On her first day, however, her position is eliminated and she’s shuffled to a war-fighting office focused on combating Russian aggression. Unfortunately, she knows little about Russia and has deep moral reservations about war. Making matters worse, she’s also working for Ariane Fletcher—a woman so terrifying, she eats generals for breakfast. As Heather learns to navigate the Pentagon’s insane bureaucracy and petty power struggles, she finds that her successes come at the expense of her personal life... and that small mistakes can have major consequences in the Department of Defense.

From Washington D.C.'s corridors of power to the dusty streets of Kabul, Kathleen McInnis spins a smart, hilarious, and heartwarming tale that shines a light on the often frustrating but sometimes rewarding experience of a career in the Pentagon.  Packed with insider knowledge about one of the least-known—yet most-powerful—organizations in U.S. national security, McInnis' debut novel establishes her as a major new literary voice with a point of view we've never seen before.

Praise For The Heart of War: Misadventures in the Pentagon…

"The Heart of War is lovingly relatable to women everywhere working to make a difference in the larger world, even as they wonder how their own lives will sort out."
— Tara Copp, Pentagon Bureau Chief, Military Times & Author, "The Warbird"

"The Heart of War really nails it. Life in the Pentagon is about more than what you read in the newspaper and author Kathleen McInnis takes you on an unforgettable trip into this most unique of worlds."
— Jim Townsend, Former Deputy Assistant Secretary of Defense for European & NATO Policy

"Part office drama, part foible-filled romp through the US's military bureaucracy... Reilly and her colleagues can be counted on throughout the story to be clueless and brilliant by turns, keeping the plot fun through its many twists. Emotional moments tug on the heartstrings, and the romantic subplot concludes in a very satisfying way. Kathleen McInnis's The Heart of War is an amusing contemporary romance."
— Foreword Reviews

"The Heart of War: Misadventures in the Pentagon is being compared to The Devil Wears Prada, and for good reason. It is truly a fish out of water story, complete with a demanding female boss and a woman who learns to navigate her new world. This book could have only been written by an insider, which Kathleen McInnis is. Reading about the politics and the way this world works was fascinating, and the author writes it perfectly. I felt like I was running around the Pentagon with her."
— Really Into This

Kathleen J. McInnis has worked in the Pentagon, the UK Parliament, and in think tanks on both sides of the Atlantic.  Having earned her PhD in War Studies, she currently analyzes international security and defense issues for the United States Congress.
Loading...
or
Not Currently Available for Direct Purchase