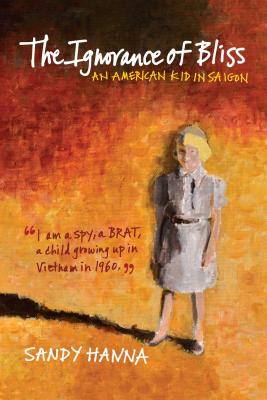 The Ignorance of Bliss

An American Kid in Saigon

“Very early in my life I became a self-appointed spy.”

The Ignorance of Bliss tells the true story of ten-year-old Sandy, who moves with her American military family to Saigon, Vietnam where her father, the Colonel, serves as a military advisor to the South Vietnamese Army.

In 1960s Saigon, Sandy finds a world of crushing poverty and extraordinary beauty; a world of streets, villas, and brothels, where politics and intrigue reside between plot and counterplot. Blissfully living a life of French decadence, Sandy maneuvers between coups, spies, bombings, corruption, and scandal as she and her thirteen-year-old brother, Tom, run an illicit baby powder and Hershey bar business on the black market and live a life of school, scouts, dance parties, and movies at the underground theater.

When the Colonel’s counterpart, Colonel Le Van Sam, delivers an expose on the current ruling Diem regime, Sandy finds that her constant spying on her father’s activities has brought her face to face with the reality of Vietnam and the anti-American sentiment that pervades it. This coming-of age story takes place in a turbulent country striving for nationalism, giving the reader a stunning look into the life of military dependents living abroad and the underlying ignorance that surrounded a little understood time in history.

Praise For The Ignorance of Bliss: An American Kid in Saigon…

"You've captured the essence of the people and the country of Vietnam at a time before all hell broke loose. You tell the story from the perspective of a child who is old enough to be aware, but whose memories come from a place of innocence. You have such a gift for nailing the descriptions of your siblings' characters and motivations. It is unique on so many levels."
— Lucie Haskins, Writer and Wife of a Vietnam Veteran

"Immersed in your wonderful book and can't put it down. Fresh, funny, tragic, and rich with unforgettable characters, this ten-year-old's vision of wartime Saigon will captivate every reader."
— Arthur P. Johnson, Writer and Baby Boomer

A resident of New York City and Lambertville, New Jersey, Sandy Hanna grew up in Saigon, South Vietnam and has been telling her story about that experience all of her life. She is an artist and a writer. Graduating from University of Massachusetts, Amherst, with a MEd, with a comprehensive in the Biology of Cognition, her undergraduate degree is from Knox College in Interdisciplinary programs in Science and Literature. She also spent a year studying design at the California Institute of the Arts with post graduate studies at Wharton. She was a designer of children’s play spaces, Williamstown Children’s Museum, Sesame Place a joint venture between CTW and Busch Entertainment and facilities for handicapped children, as well as a marketing director and consultant for a variety of diverse industries; children’s museums, theme parks, modular construction, etc. Her passion, however, is one as a storyteller.
Loading...
or support indie stores by buying on