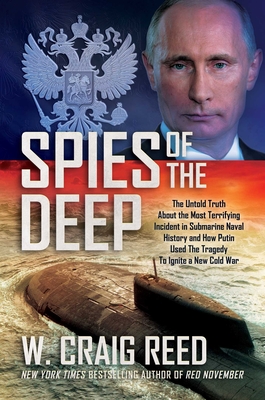 Spies of the Deep

Twenty years after the most terrifying submarine disaster in naval history, the untold story about why the Russians buried the truth and how Vladimir Putin used the incident to ignite a new Cold War finally comes to light.

A decade after the Cold War and just a few months after Vladimir Putin came to power, a violent explosion sent the Russian submarine Kursk to the bottom of the Barents Sea. The Russians claimed an outdated torpedo caused the incident and refused help from the West while twenty-three survivors died before they could be rescued. When Russian naval officers revealed evidence of a collision with a U.S. spy sub, Putin squelched the allegations and fired the officers. In Spies of the Deep, the New York Times bestselling author of Red November shatters the lies told by both Russian and U.S. officials and exposes several shocking truths. Included are never-before-revealed facts and firsthand accounts from deep sea rescue divers, U.S. submariners, government officials, Russian naval officers, and expert witnesses. Not to mention unveiled evidence of a secret deal between Putin and U.S. President Bill Clinton to avert a nuclear war. Discover how the Kursk propelled Putin to power and how he used its demise to muzzle oligarchs, wrest control of energy firms, rebuild Russia’s military, and dominate Arctic resources and sea routes.

Spies of the Deep explores how the Kursk incident will be remembered as a pivotal historical event that propelled the world’s superpowers into another, far more dangerous Cold War, sparked conflicts in the Arctic, and fueled a resource war that could create an economic nightmare not seen since the Great Depression. Are U.S. and NATO navies already too far behind to deal with new threats from Russia, China, North Korea, and Iran, and if so, how might that impact each of us?

Praise For Spies of the Deep: The Untold Truth About the Most Terrifying Incident in Submarine Naval History and How Putin Used The Tragedy To Ignite a New Cold War…

"W. Craig Reed's Spies of the Deep is a chilling—downright terrifying—dive into the current global crisis. It looks at where we've been as a world power and the dagger's edge upon which we're all balanced. The book shines a light into the dark machinations of politicians and the military—both here and in Russia and China—and how clandestine operations are ratcheting up tensions to the point of global economic collapse, even nuclear war. If you want to understand the threat at our very doorstep, pick up this book and prepare to be shocked and enlightened."
— James Rollins, #1 New York Times Bestselling Author of "Crucible"

"W. Craig Reed's Spies of the Deep is even more engaging than his award-winning Red November. Reed is a former U.S. Navy submariner and diver, so all of his books are well-researched, accurate, and read like bestselling Tom Clancy thrillers. I thoroughly enjoyed it!"
— Andrew Peterson, Bestselling Author of "Hired to Kill"

“Spies of the Deep exposes Vladimir Putin’s frightening plan to dominate world resources and how the Kursk tragedy propelled him to power. This nonfiction book reads like a Tom Clancy thriller that you can’t put down.”
— Malcolm Boyes, former producer of Entertainment Tonight

“W. Craig Reed’s Spies of the Deep is timely and chilling, given Putin’s plans to stay in power for life and the brewing conflicts with Russia, China, Iran, and North Korea. This nonfiction book is as terrifying as any Tom Clancy novel.”
— Grant Blackwood, #1 New York Times Bestselling Author of Tom Clancy’s Duty and Honor.

W. (William) Craig Reed is the New York Times bestselling author of Red November: Inside the U.S.–Soviet Submarine War and Spies of the Deep: The Untold Truth About the Most Terrifying Incident in Submarine Naval History. Reed is a former U.S. Navy Diver and submariner, and the co-founder of the award-winning Us4Warriors Veteran’s Foundation. Reed earned commendations for completing secret missions during the Cold War, several in concert with U.S. Navy SEAL Team One.
Loading...
or support indie stores by buying on