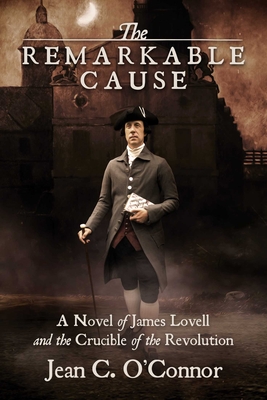 A Novel of James Lovell and the Crucible of the Revolution

James Lovell desperately wants to help the American cause, but alone in a cold, dark cell in the Boston Stone Jail, his dreams seem a faint illusion.

In icy March winds, pounded by the Americans’ cannon, General Howe evacuates British troops and Loyalists from Boston. James Lovell is forced into a ship bound for Halifax, while his father and family take passage for the British stronghold in the ship’s upper berth. In jail in Halifax, James can only write letters and pray for release, hoping General George Washington will hear his appeal.

In The Remarkable Cause, experience conflict and courage in the roots of the American Revolution:


Jean C. O’Connor, a high school English teacher for over thirty years, researched this story using letters, journals, and documents written by James Lovell and his contemporaries. Inspired by a few sentences in her grandmother’s journal, Jean discovered details of that time far away—yet still relevant. Images from early newspapers and pictures enliven the narrative’s pages.

Praise For The Remarkable Cause: A Novel of James Lovell and the Crucible of the Revolution…

"I enjoyed the characters and historical accuracy of the story. You've made the events 'come alive' through your excellent writing. Through the descriptive language, I could see, hear, and feel the excitement and tension of the era."
— Beverly Ann Chin, Ph.D., Past President, National Council of Teachers of English, Chair, Department of English, the University of Montana

"The Remarkable Cause by Jean O'Connor is a highly readable account of Boston Latin School alumnus and teacher James Lovell. O'Connor captures the world of James Lovell, including the political turmoil; young readers will effectively experience the challenging times in which he lived."
— Malcolm Flynn, Historian, Assistant Head Master Emeritus, Boston Latin School

"A splendid book that truly brings to life our rich heritage of liberty—all the more poignant as we commemorate these historic events year-by-year on the way to celebrating the 2026 formal Semiquincentennial of these United States of America."
— Jane Lee Hamman, Montana State DAR Regent 2016-2019, sponsor of a revolutionary ancestor on Pathway of the Patriots

"The Remarkable Cause: A Novel of James Lovell and the Crucible of the American Revolution has all the makings of a classic that can stand with Johnny Tremain and The Fifth of March. Jean C. O'Connor's dramatic chronicle of the events leading to the Revolution in Boston not only shows how each event impacted the colonial society, but also demonstrates the fact that the American Revolution was very much a civil war. Sometimes families were torn apart by the events taking place around them. The story of James Lovell will entertain and inform readers of all ages. Students and teachers will also benefit from the accompanying website that contains curricular materials to delve into the history of James Lovell's world."
— Timothy Symington, Professor at Mount Wachusett Community College in Gardner, MA and contributing writer for the "Journal of the American Revolution"

"In her novel, The Remarkable Cause, Jean C. O'Connor uses Boston and a true historical character (James Lovell) to explore the many layers of America's revolutionary experience. Through sympathetic, memorable characters, the book illuminates the painful conflicts among American loyalists and patriots that tore apart many families and neighbors, along with the intrigue, fighting, idealism, and suffering that comes with the well-known curse of living in 'interesting times.'"
— David O. Stewart, author of "George Washington: The Political Rise of America's Founding Father" (nonfiction), and "The Wars and Wives of the Hessian Sergeant," a forthcoming novel of 18th-century New England

"In The Remarkable Cause, Jean C. O'Connor brings to life the story of James Lovell in the tumult of revolutionary Boston. But this is more than the story of virtuous patriots confronting malevolent stories, as O'Connor shows us the nuanced and conflicted relationships among family members on different sides of the conflict. James Lovell and his father, both teachers at Boston Latin, the nation's oldest school, both left their home town with the British Evacuation on March 17, 1776—the father as an exile, James, the son, as a prisoner of war. We meet other members of the family—sister Elizabeth, who flirts with a British officer to secure an appointment for brother Benjamin, who orders the wrong sized cannon balls, and see how this remarkable cause strained family ties in the creation of a new nation. This is a well-known story told through the fresh eyes of men and women who lived through and helped to shape it."
— Robert J. Allison, Professor of History, Suffolk University, author of "The American Revolution, a Concise History"

"In descriptive, fast-paced chapters, O'Connor successfully takes readers on a journey back to colonial Boston, exploring the celebrated revolutionary events that ultimately led to American Independence, while vividly highlighting the often less remembered harrowing realities...the Siege of Boston, prisoners of war, and how the Cause divided families on both sides of the political divide."
— Christian Di Spigna, author of "Founding Martyr: Life and Death of Dr. Joseph Warren, the American Revolution's Lost Hero

"Brimming with rich historical details, and pulsing with the spirit of the Revolution, Jean O'Connor's The Remarkable Cause does justice to a forgotten American hero, while deftly portraying the years leading up to the Revolution, including tensions between loyalists and patriots, conflicts between citizens and British troops, and anxieties within families, as the path to war became inevitable. A hugely enjoyable novel."
— Nina Sankovitch, author of "American Rebels: How the Hancock, Adams, and Quincy Families Fanned the Flames of Revolution"

Growing up in New England, Jean C. O’Connor developed a fascination with the American history evident in so many landmarks there. Her grandmother’s house in Andover, Massachusetts, has a historic plaque by the front door; the Marquis de Lafayette made a speech from its steps when he came to visit the new United States following the Revolutionary War. Her enjoyment of history as well as literature led to a teaching career of thirty-seven years in Montana, particularly in Helena, the  capital.  She  is  passionate  about  meaningful  learning  experiences  for  students,  and  about working  with  teachers.  Her  work  with  the  state teachers’ association led to her receiving the Montana Association of Teachers of English Language Arts Distinguished Educator Award. As an educator, she received the NCTE High School Teacher of Excellence Award 2018, one of only fourteen teachers in the country. A few lines in her grandmother’s journal inspired her interest in the story that forms the basis for The Remarkable Cause: A Novel of James Lovell and the Crucible of the Revolution.
Loading...
or
Not Currently Available for Direct Purchase