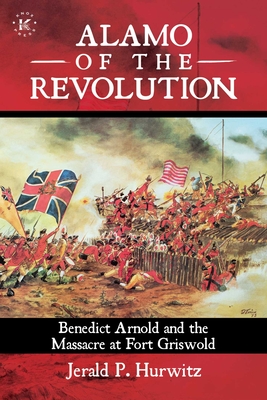 Alamo of the Revolution

Benedict Arnold and the Massacre at Fort Griswold

Before the British surrendered at Yorktown, Benedict Arnold led 1,800 British troops on a punitive expedition to destroy the American privateer base in New London. The result was a bloody assault by the British on Fort Griswold and the near massacre of its defenders.

In July of 1781, an American privateer sailing out of New London, Connecticut captured the British merchantman the Hanna, loaded with a bounty of luxury goods destined for British officers based in New York City. That action induced the British supreme leader of British forces in America to grant permission to the infamous traitor Benedict Arnold to lead an 1,800-man punitive amphibious expedition to destroy the American privateer base in New London. Being a native of the region, Arnold—a former American general—had intimate knowledge of the port and its defenses, including the most powerful fortification defending the harbor from Groton Heights Fort Griswold. So important was the fort that Arnold dedicated half of his expeditionary force to landing on the east side of the Thames River, for the sole purpose of capturing the fort and putting its heavy cannon out of commission.

But Arnold miscalculated and misapprehended the strength of the fort and its defenders. That misperception would have grievous consequences for the fort’s British attackers and their outnumbered American defenders. The defenders numbered around 161, made up of some forty members of the regular garrison and some volunteers from the privateers’ crews, including a member of the Pequot tribe. The bulk of the defenders were citizen volunteers from Groton and nearby towns. Virtually all males of local families, aged anywhere from twelve to seventy, defended the fort. In the end, the attackers suffered close to two hundred casualties. The patriots faced catastrophic losses amounting more than 80 percent with half the defenders slain outright.

This is a story of that long forgotten stubborn defense by American patriots and the unusual and unforeseen circumstances that turned the assault into a bloodbath—the most sanguinary battle ever witnessed on the soil of Connecticut.

Jerry Hurwitz is a native of the state of Connecticut, where as a young child he first learned about the bloody assault on Fort Griswold from a tricentennial illustrated history of the state published in 1935. This led to a lifelong passion for learning about the American Revolution. Hurwitz is a graduate of Lehigh University and the University of Connecticut Law School and has been a practicing attorney for forty-five years. He has served as president of the Princeton Battlefield Society for twenty years, a nonprofit corporation dedicated to preserving and restoring the Princeton Battlefield. As president, he engaged in a thirteen-year struggle to save a core area of the battlefield from a housing development. He has lectured about and given tours of the Princeton Battlefield. He has also written magazine articles on the Battle of Princeton and on the massacre of Fort Griswold. Hurwitz has been a longstanding member of the Company of Military Historians, the American Battlefield Trust, and the 43rd Regiment of Foot/2nd Pennsylvania Regiment. He currently resides and works near Tampa, Florida.
Loading...
or support indie stores by buying on