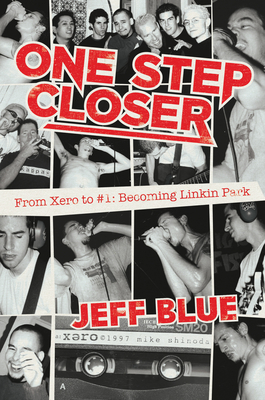 From Xero to #1: Becoming Linkin Park

The dramatic story of the unlikely partnership that led to Hybrid Theory, the biggest-selling debut album of the 21st Century.

From the unique perspective of the executive who discovered them, One Step Closer reveals how Brad Delson’s college internship was a catalyst for a group of young musical visionaries, led by Mike Shinoda, which gave rise to a band that survived countless rejections, exceeded everyone’s expectations but their own, and became the voice of a generation.

This against-all-odds story chronicles the early days of Linkin Park, from their first demo and Whisky a Go Go performance as Xero, through their tireless efforts to perfect their iconic sound and the discovery of Chester Bennington. Jeff Blue was there when no one else believed—first as their publisher, then as their A&R guy. This is his memoir of that incredible journey.

Riveting and inspiring, One Step Closer is a testament to perseverance, as well as a detailed behind-the-scenes account of the building of a dream and what it takes to make it.

"Resilience, drive and the ability to overcome adversity are the qualities that create stars. Adversity may make or break you. But adversity primarily reveals you. In the case of Blue and Linkin Park, it revealed greatness." —Forbes

He received a BMI Songwriter Award in 2008, a Hollywood Lifetime Achievement Award in 2018, and a Music Influencer of the Year Award 2017. As a songwriter, he has been signed to Universal Music, Warner Chappell, Zomba, and BMG Music Publishing. His articles have been published in Billboard and HITS, and he has lectured internationally. In addition to Linkin Park, he’s worked with Macy Gray, Limp Bizkit, Korn, Daniel Powter, the Last Goodnight, Hoobastank, Better Than Ezra, DJ Ashba, and co-music supervised Aaliyah’s Queen of the Damned soundtrack. He lives in Los Angeles where he received his undergraduate degree at UCLA, and law degree from Loyola Law School.
Loading...
or support indie stores by buying on