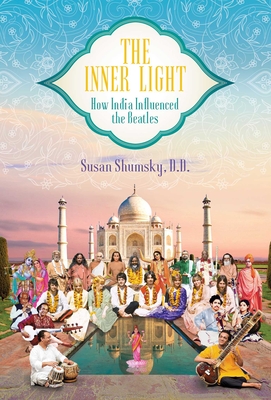 How India Influenced the Beatles

The hidden meanings of the Beatles’ most esoteric lyrics and sounds are revealed by a rare insider who spent two decades with the man who made “meditation,” “mantra,” and “yoga” household words: Maharishi Mahesh Yogi.

“I absolutely love this book. Between the stories and the pictures, many I’ve not seen before, this is truly a spiritual journey.” —Chris O’Dell, author of Miss O’Dell, My Hard Days and Long Nights with The Beatles, The Stones, Bob Dylan, and the Women They Loved

The spiritual journey of the Beatles is the story of an entire generation of visionaries in the sixties who transformed the world. The Beatles turned Western culture upside down and brought Indian philosophy to the West more effectively than any guru. The Inner Light illumines hidden meanings of the Beatles’ India-influenced lyrics and sounds, decoded by Susan Shumsky—a rare insider who spent two decades in the ashrams and six years on the personal staff of the Beatles’ mentor, Maharishi Mahesh Yogi.

“With clarity, depth, and impeccable research, an exceptionally comprehensive book filled with engaging tales and fresh insights that even diehard Beatles fans will find illuminating.”
—Philip Goldberg, author of American Veda: From Emerson and The Beatles to Yoga and Meditation, How Indian Spirituality Changed the West

This eye-opening book draws back the curtain on the Beatles’ experiments with psychedelics, meditation, chanting, and Indian music. Among many shocking revelations never before revealed, we discover who invented "raga rock" (not the Beatles), the real identity of rare Indian instruements and musicians on their tracks, which Beatle was the best meditator (not George), why the Beatles left India in a huff, John and George’s attempts to return, Maharishi’s accurate prediction, and who Sexy Sadie, Jojo, Bungalow Bill, Dear Prudence, Blackbird, My Sweet Lord, Hare Krishna, and the Fool on the Hill really were.

“This book reminds us in illuminating fashion why Susan is the premier thinker about India’s key influence upon the direction of the Beatles’ art. In vivid and stirring detail, she traces the Fabs’ spiritual awakening from Bangor to Rishikesh and beyond.” —Kenneth Womack, author of John Lennon 1980: The Last Days in the Life

Half a century later, the Beatles have sold more records than any other recording artist. A new generation wants to relive the magic of the flower-power era and is now discovering the message of this iconic band and its four superstars. For people of all nations and ages, the Beatles’ mystique lives on. The Inner Light is Susan Shumsky’s gift to their legacy.

Praise For The Inner Light: How India Influenced the Beatles…

“With all the Beatles books out there, it's extremely rare for anyone to find a genuinely worthwhile angle to re-examine the Fabs anymore, but Shumsky has found one and handles it honestly and thoroughly.”
— Mike Segretto, Psychobabble

“In this 500-page book, replete with over 170 photos, over 130 QR codes, and stunning revelatory information, a niche in Beatles history that until now has largely been ‘sampled’ is thoroughly investigated and brought to light. Whatever your religion, philosophy, or outlook, The Inner Light is a superb work. Even lifelong Beatles fans will definitely learn something new in this well-written, meticulously documented book.”
— Jude Southerland Kessler, Culture Sonar

“Susan’s book tells a whole story, without sugar coating the truth. The references are like ripples in a pond, reminding me of places, people, events, books, and music that warmly fill my heart, mind and soul.”
— Gurudas (Roger Siegel), author of By His Example

“A captivating, perceptive study. Long after The Beatles’ 1968 visit to Rishikesh, the sights, sounds, and religious beliefs of India resonated through their lives and music. Their stay at the ashram comes under special scrutiny, including some revelatory stories about Maharishi.”
— Gary Tillery, author of The Cynical Idealist: A Spiritual Biography of John Lennon and Working Class Mystic: A Spiritual Biography of George Harrison

Susan Shumsky, D.D. has authored twenty books in English, released thirty-six foreign editions, won forty-one book awards, and done 1,300 media appearances. A rare insider, she was on the Maharishi Mahesh Yogi’s personal staff for six years and lived in his ashrams for twenty years.
Loading...
or support indie stores by buying on