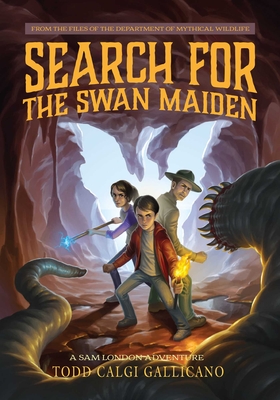 Search for the Swan Maiden

In the third book of the epic adventure series that “is sure to keep lovers of Rick Riordan running to the shelves,” Sam London embarks on a forbidden quest filled with danger, despair, and the terrifying Mongolian death worm! (School Library Journal)

In Sam London’s third adventure with the Department of Mythical Wildlife, the boy who saw the gryphon will face his greatest fear. Following the heartbreaking conclusion of his second case, Sam has spent his days searching for the swan maiden. Driven by his belief the maiden is still alive, he sets out with Dr. Vance Vantana and Tashi on a forbidden quest to reunite his family.

But the journey is long and treacherous and will lead them through the lair of the Mongolian Death Worm—a terrifying creature that has broken the Gryphon’s Law and is attacking anyone who dares to cross its path. And if this wasn’t enough, an old enemy from Vance’s past returns to exact a revenge that will doom all of humankind.

With the future of his family and the fate of the world at stake, Sam must make an impossible choice that will change the course of his life and those he loves forever. Can Sam right a wrong or will Gaia, itself, decide to fight back?

Todd Calgi Gallicano is the author of Guardians of the Gryphon’s Claw, the first case in the Sam London Adventure series from the Files of the Department of Mythical Wildlife. A graduate of New York University’s School of Film and Television, Todd began his career in the film industry, before venturing into the world of books when he was provided secret files from the Department of Mythical Wildlife’s archives.

Despite pressure from the news media and government, Mr. Gallicano remains tight-lipped when it comes to questions about the DMW and his sources within the secret organization. He encourages fans of Sam London to learn more about mythical creatures and to visit and support our nation’s majestic national parks.

When he’s not hammering out the next Sam London novel on his 1938 Royal Deluxe typewriter, Mr. Gallicano enjoys spending time with his wife and daughter. He resides with his family in North Carolina, where he is constantly on the lookout for gargoyles, chupacabras, and other nefarious creatures.
Loading...
or support indie stores by buying on
(This book is on backorder)