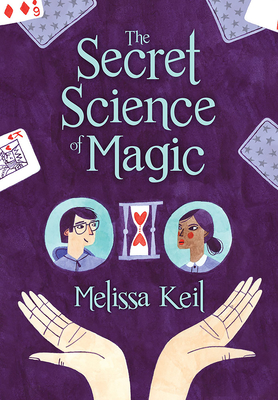 The Secret Science of Magic

Seventeen-year-old Sophia is a math genius, so surely she'll be on easy street after graduation.

Except she's just learned child prodigies become either smash hits or total meltdowns after high school. Now with her BFF sending off college applications, Sophia's feeling the pressure to lock down her own future before she's left in the dust. But when mysterious playing cards keep turning up inside her textbooks, she's really thrown off course.

Joshua is Sophia's classmate: adorkable, charmingly carefree, and an amateur magician. He's crushed on Sophia for as long as he can remember. With a ton of romantic gestures up his sleeve, Joshua thinks now is the perfect time to tell Sophia how he feels. He doesn't know how very wrong he is.

Told in a dual narrative, this opposites-attract, young adult rom-com offers plenty of laughs as Joshua stumbles again and again to impress the most skeptical audience that magic has ever met: Sophia. But if Joshua truly cares for her, first he'll have to work on his timing and meet Sophia halfway. It'll take a scientific feat of magic to dazzle and bewilder the smartest girl at school.

Praise For The Secret Science of Magic…

"The story intricately explores the teenagers' quirky relationships and the notion of what it takes to feel comfortable in one's own skin. Sophia's character is authentically geeky, and readers will empathize with her anxiety."—Kirkus Reviews

"Readers struggling with social and personal interaction issues, awkwardness about fitting into their community, and uncertainty about where their future may take them will embrace this novel"—Booklist

"Excellent character development of the protagonists (Sophia and Elsie are 'brown girls' of South Asian descent; Joshua is white), their diverse group of friends, and their families (Elsie's brothers, especially, are a hoot) makes the romantic relationship just one among several satisfying story strands, and witty dialogue keeps pages turning."—The Horn Book Magazine

Melissa Keil studied cinema and anthropology and has spent time as a high school teacher, Middle-Eastern tour guide, waitress, and IT help-desk person. She now works as a children's book editor and spends her free time watching YouTube and geek TV. She lives in Australia.
Loading...
or
Not Currently Available for Direct Purchase