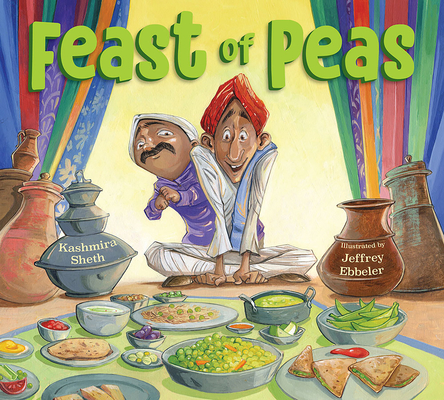 A vibrant and deliciously amusing suspenseful story set in India about food and gardening, anticipation, and generosity.
Every morning, Jiva works in his garden until the sun turns as red as a bride's sari. He plants peas and beans, potatoes and tomatoes, eggplants and okra in his vegetable patch. While his friend Ruvji admires his plants Jiva sings,
"Plump peas, sweet peas,
Lined-up-in-the-shell peas.
Peas to munch, peas to crunch
I want a feast of peas for lunch!"
But each time Jiva is ready to pick the peas for his feast, they're already gone. He tries making a scarecrow and a fence, but it's no use. Who might have taken them this time?

Praise For Feast of Peas…

"[A] dazzlingly illustrated new fairy tale. . . the images burst with engaging movement. . . .a nice lesson on friendship and forgiveness." —Booklist

Kashmira Sheth was born in India with Guajarati as her mother tongue and began learning English in fifth grade. She had lived in Bhavnagar and Mumbai before moving to United States when she was seventeen to attend Iowa State University, where she received a BS in microbiology. Before becoming an author Kashmira had many different jobs, including running a dance school and choreographing and performing Indian dances, working in a bakery, and working as a food microbiologist. She is the author of several picture books, chapter books, and middle grade and young adult novels. Taking inspiration from her own life and experiences, much of Kashmira's work centers on Indian culture and features Indian and Indian American characters.

Jeffrey Ebbeler, a graduate of Art Academy of Cincinnati, has been creating art for children for almost twenty years and has illustrated over fifty books. After college he worked for a puppet theater sculpting marionettes and performing. He also created many large-scale animal puppets for the Central Park Zoo. He lives in Ohio.
Loading...
or support indie stores by buying on