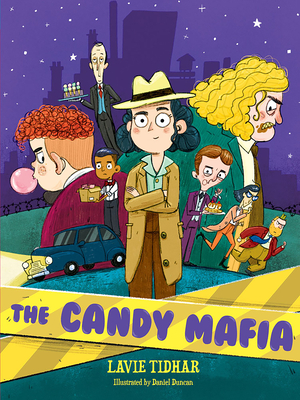 Twelve-year-old private detective Nelle is swept up in a world of candy smuggling in this illustrated, middle grade mystery-comedy from World Fantasy Award-winner Lavie Tidhar.

In a city where candy is outlawed, Nelle Faulkner is a preteen private detective working from her mother's garden shed. When Eddie de Menthe, a notorious kid-gangster from a criminal candy ring, asks for help finding a lost teddy bear, Nelle Faulkner is on the case. But one sinister turn of events leads to another and Eddie himself goes missing! Nelle and her friends quickly find themselves navigating a shady underworld of sweets smugglers, back alley-deals, and storefront firebombs.

If Nelle has any hope of tracking down her missing client, she'll first have to unmask the true faces behind the smuggling operation. Is this the easy case Nelle thought it would be, or has she unknowingly put herself and everyone around her in inescapable danger?

Praise For The Candy Mafia…

"Nelle is a sturdy, intrepid, practical character surrounded by a colorful cast of candy-obsessed children and adults in this fast-paced mystery.. . . there's plenty here to satisfy tween mystery lovers. . . .mystery, humor, plenty of action, and a red herring or two with an explosive climax." —School Library Journal

★ "Tidhar folds in plenty of noir tropes and contretemps (not to mention a stolen teddy bear for a McGuffin), while in his sparse but atmospheric line and fill drawings, Duncan depicts the young gumshoe properly clad in fedora and trenchcoat. It won't take a detective to spot Willie Wonka, as well as Sam Spade, hidden in the tongue-in-cheek caper's literary DNA." —Booklist, Starred Review

Lavie Tidhar, at various times, has vanished in the jungles of Borneo, climbed a South Pacific volcano in bare feet, visited the singing sand dunes of the Gobi Desert, ridden the Trans-Siberian train from Moscow to Beijing, and been chased on the beach in Malawi by a very angry hippo (they've made up since). He's lived in Israel, South Africa, Vanuatu, and Laos, but currently makes up words in the part of England where there are lots of squirrels. In his other life, he is a multiple award-winning author of novels for adults

Daniel Duncan is a freelance illustrator inspired by stories, films, old, photos, and sports. Highly commended by Macmillan UK for the Macmillan Prize for Illustration, he was also shortlisted for the AOI Awards for the Children's Books New Talent Category. He creates most of his work in an old stable, now turned studio, in England.
Loading...
or
Not Currently Available for Direct Purchase