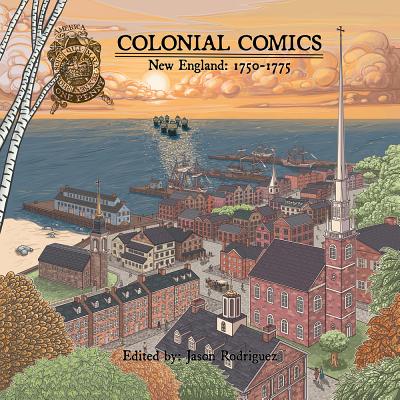 A massacre in Boston. A tea party. A shot heard around the world. But who was the first casualty of the massacre? How did the tea get to Boston Harbor? What was the Battle of Concord like for a Minute Man? Colonial Comics: New England, 1750–1775 expands the frame of this important period of American history. Unconventional characters come to life, including gravedigging medical students, counterfeiters, female playwrights, instigators of civil disobedience, newspaper editors, college students, rum traders, freemen, and slaves.

"The stories all stand alone but together, they add up to a well-rounded picture of life in New England in the middle of the 18th century." —Brigid Alverson, School Library Journal

"We love the work that editor Jason Rodriguez and Colorado's Fulcrum Press are doing with this series. We hope the books inspire lots of comic-reading history buffs everywhere!" —American Antiquarian Society

Jason Rodriguez is an Eisner and Harvey-nominated editor of comics and graphic novels. His anthologies include Postcards: True Stories That Never Happened, Colonial Comics, Volume II: New England, 1620-1750, and Artists Against Police Brutality. He is also the author of the short story collection Try Looking Ahead. He lives in Arlington, Virginia. For more on Jason’s current and future projects, visit his website at jasonrodriguez.com or connect with him on Twitter (@JayRodriguez) or on Facebook.
Loading...
or
Not Currently Available for Direct Purchase