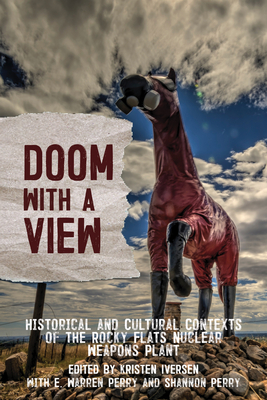 Doom with a View

Tucked up against the Rocky Mountains, just west of Denver, sits the remnants of one of the most notorious nuclear weapons sites in North America: Rocky Flats. With a history of environmental catastrophes, political neglect, and community-wide health crises, this site represents both one of the darkest and most controversial chapters in our nation’s history, and also a conundrum on repurposing lands once considered lost. As the crush of encroaching residential areas close in on this site and the generation of Rocky Flats workers passes on, the memory of Rocky Flats is receding from the public mind; yet the need to responsibly manage the site, and understand the consequences of forty years of plutonium production and contamination, must be a part of every decision for the land’s future.

Praise For Doom with a View: Historical and Cultural Contexts of the Rocky Flats Nuclear Weapons Plant…

"A cautionary tale of the moral choices we face, this book should and indeed must be imperative reading for every US citizen.” —Helen Caldicott, physician, activist, and author of If You Love This Planet

"A powerful and unflinching indictment of the government’s ill-considered decision to open radioactively contaminated lands neighboring the former Rocky Flats nuclear weapons site to public use." —Trisha T. Pritikin, Hanford Downwinder and author of The Hanford Plaintiffs: Voices from the Fight for Atomic Justice

Kristen Iversen’s work includes the books Full Body Burden: Growing Up in the Nuclear Shadow of Rocky Flats (now a forthcoming documentary), Molly Brown: Unraveling the Myth, and Shadow Boxing: Art and Craft in Creative Nonfiction. Her work has appeared in the New York Times,The Nation, The American Scholar, and other publications. Originally from Colorado, Iversen has taught at universities around the country and is professor of creative writing at the University of Cincinnati, where she is also Literary Nonfiction editor of The Cincinnati Review. She holds a PhD from the University of Denver, and is currently a Fulbright Scholar at the University of Bergen.