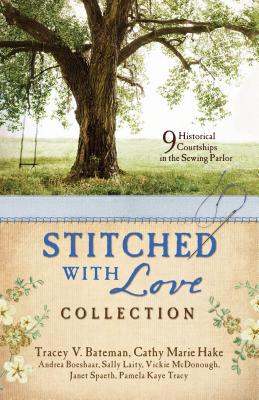 Treasure this collection of nine historical romances. Faced with finding the right fit in life and love, nine young women seek the courage to stitch together romance. But when unexpected obstacles abound, will love unravel before their eyes?

Tumbling Blocks by Andrea Boeshaar
Elsa Fritch’s dreams tumble from their heights when Shane Gerhard comes to town to collect on the contract between their parents. Could God expect her to endure an arranged marriage with a man who antagonizes her and disregards Him?

Old Maid’s Choice by Cathy Marie Hake
Betsy Larkin thinks she must choose between the siblings she is rearing and a man who loves her. Blacksmith Tyson Walker is used to bending iron, but can love and patience bend the will of a woman who is sure she is destined to be an old maid?

Jacob’s Ladder by Pamela Kaye Tracy
Samantha Thomasohn dreams of riches and of escaping the mundane life clerking for her father’s store. One man holds the riches while another holds her heart. How is true love to be defined, and where will Samantha place her priorities?

Four Hearts by Sally Laity
Diana Montclair covers her loneliness with an arrogant exterior and a drive for perfection that keeps friends at bay. She reluctantly endures the weekly sewing circle. Can Mrs. T.’s words of truth and a newfound friend help her realize she has been seeking the needs of her heart in the wrong places?

Back flap: (30-word blurbs for 5)
Marry for Love by Janet Spaeth
Wild prairie-born Brigit Streeter lacks the domestic and social skills she needs to marry the cultured new minister, Peter Collins, who has come to the Dakota Territory from St. Paul. When Peter’s supervising elder brings Brigit a gift of fabric to make her wedding dress, Brigit is lost. She can’t sew. Can Brigit become a Psalm 31 wife?

Basket Stitch by Cathy Marie Hake
Bride-who-isn’t-to-be Rosemary Preston finds herself stranded in No Man’s Land without a groom. Rescued and taken to the Stafford ranch, she discovers Micah Stafford is everything she ever prayed for in a mate. Can a sampler-stitchin’ city woman soften a rough-and-rugged man’s heart?

Double Cross by Tracey V. Bateman
Ignoring Josephine Stafford’s vehement objections, Grandma determines to make her granddaughter into a proper lady. The whole venture becomes worth it when Pastor Mark Chamberlain starts showing interest in Jo—that is, until a “friend” double crosses her by blabbing all about Jo’s tomboyish ways. Will Mark abandon Jo, or will he love her for being true to who God created her to be?

Spider Web Rose by Vickie McDonough
Josh Stafford’s a tease, but he doesn’t like it when the joke’s on him. The spunky lad he found stranded in No Man’s Land has turned out to be a lovely young lady. When Josh and Rachel Donovan are together, tempers flare. When dreams would lead these two in different directions, is God weaving a web of love to keep them together?

The Coat by Tracey V. Bateman
As a jobless widow Leah Halliday struggles to clothe her son in the aftermath of World War II. When her boy’s coat, lined with an heirloom quilt, causes him to be the target of teasing at school, the headmaster’s heart goes out to him. But Max Reilly has a scandalous history. Should Leah trust him?

TRACEY V. BATEMAN is a past president of the American Christian Fiction Writers and has more than 30 stories in print. She believes all things are possible and encourages everyone to dream big. Tracey lives with her husband and four children in the beautiful Missouri Ozarks.

Andrea Boeshaar was born and raised in Milwaukee, Wisconsin. She and her husband Daniel have been married 40 years. They pride themselves on their wonderful family, including 5 grandchildren.Andrea’s publishing career began in 1994 when her first novel was released by Heartsong Presents book club (Barbour Publishing). In 2007, Andrea earned her certification in Christian life coaching, and she’ll soon earn her bachelor’s degree in Business Management.

Meanwhile, Andrea continues to write. Her latest novels include Give Me Thine Heart, Love’s Guiding Light (Steeple View Publishing), both historical, and a contemporary novel, Her Hometown Heart (Pelican Book Group). In 2019, the long-awaited third installment in her Shenandoah Valley Saga will release.


Cathy Marie Hake is a Southern California native. She met her two loves at church: Jesus and her husband, Christopher. An RN, she loved working in oncology as well as teaching Lamaze. Health issues forced her to retire, but God opened new possibilities with writing. Since their children have moved out and are married, Cathy and Chris dote on dogs they rescue from a local shelter. A sentimental pack rat, Cathy enjoys scrapbooking and collecting antiques. “I’m easily distracted during prayer, so I devote certain tasks and chores to specific requests or persons so I can keep faithful in my prayer life.” Since her first book in 2000, she’s been on multiple bestseller and readers’ favorite lists.

Sally considers it a joy to know that the Lord can touch other hearts through her stories. She has written both historical and contemporary novels, including a co-authored series for Tyndale House and another for Barbour Publishing, nine Heartsong Romances, and twelve Barbour novellas. Her favorite pastimes include quilting for her church’s Prayer Quilt Ministry and scrapbooking. She makes her home in the beautiful Tehachapi Mountains of southern California with her husband of over fifty years and enjoys being a grandma and great-grandma.

In first grade, Janet Spaeth was asked to write a summary of a story about a family making maple syrup. She wrote all during class, through morning recess, lunch, and afternoon recess, and asked to stay after school. When the teacher pointed out that a summary was supposed to be shorter than the original story, Janet explained that she didn’t feel the readers knew the characters well enough, so she was expanding on what was in the first-grade reader. Thus a writer was born. She lives in the Midwest and loves to travel, but to her, the happiest word in the English language is home.

Pamela Tracy started writing at a very young age (a series of romances, all with David Cassidy as the hero. Sometimes Bobby Sherman would interfere). Then, while earning a BA in Journalism at Texas Tech University in Lubbock, Texas, she picked up the pen again (only this time, it was an electric typewriter on which she wrote a very bad fiction novel). First published in 1999 by Barbour Publishing, she is a USA Today bestselling author who has published more than thirty-five books in multiple sweet, inspiration, and devotional genres. She’s a Carol Award winner (from American Christian Fictions Writers) as well as Rita finalist (from Romance Writers of America).