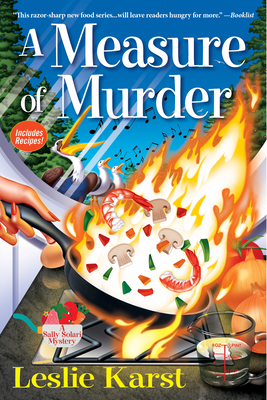 A Measure of Murder

Sally Solari is busy juggling work at her family's Italian restaurant, Solari's, and helping Javier plan the autumn menu for the restaurant she's just inherited, Gauguin. Complicating this already hectic schedule, Sally joins her ex-boyfriend Eric's chorus, which is performing a newly discovered version of her favorite composition: the Mozart Requiem. But then, at the first rehearsal, a tenor falls to his death on the church courtyard—and his soprano girlfriend is sure it wasn't an accident.

Now Sally's back on another murder case mixed in with a dash of revenge, a pinch of peril, and a suspicious stack of sheet music. And while tensions in the chorus heat up, so does the kitchen at Gauguin—set aflame right as Sally starts getting too close to the truth. Can Sally catch the killer before she's burnt to a crisp, or will the case grow as cold as yesterday's leftovers?

In a stew of suspects and restaurateurs, trouble boils over in the second in Leslie Karst's tasty and tantalizing Sally Solari mystery series, A Measure of Murder.

Praise For A Measure of Murder: A Sally Solari Mystery…

Praise for A Measure of Murder:
"Engaging characters, terrific writing, and a savory blend of musical and culinary erudition...polymath Karst sauces her plot without masking its flavor. And she’s a dab hand with the red herrings."
—Publishers Weekly starred review

“A mystery that rings true and features several unexpected twists along with the appended recipes that are de rigueur for culinary cozies.”
—Kirkus Reviews

"A tasty, food-oriented mystery, enriched with a handful of recipes. Amateur detective and restauranteur Sally Solari has to juggle the hectic life of restaurant management and murder investigation in this savory sleuth-connoisseur’s delight!"
—Midwest Book Review

Praise for Dying for a Taste:
"Karst’s smart, engaging characters steal the show in this razor-sharp new food series. Recipes add to an intelligent story that will leave readers hungry for more."
—Booklist

“The story blends the best of the cozy genre with food and great characters...This is the perfect book to chew on while eating lunch in the break room or before cooking that perfect dinner.”
—Jeff Ayers, RT Book Reviews, four-star review

"Dying for a Taste is a successful blend of mystery and foodie novels...This amuse-bouche will leave readers salivating for the next Sally Solari mystery."
—Foreword Reviews

"The best mysteries, to my mind, have a deep and sympathetic understanding of human nature as well as a rock solid ethical foundation, and Leslie Karst’s Dying for a Taste satisfies on both counts. With a smart sleuth, captivating seaside setting and strong family relationships, this delicious culinary mystery left me hungry for second helpings."
—Leslie Meier, author of the Lucy Stone mystery series

“Leslie’s Karst’s DYING FOR A TASTE is a mouthwatering meal of intricate plotting and complex characterization in a sparkling setting on the coast of California. The plot moves swiftly through twists and turns led by former legal eagle, Sally Solari, a smart, savvy heroine who will not quit until she gets the answers she seeks in the mystery of who murdered her restauranteur aunt. At turns poignant and precarious, this story captivates all the way to the very last page. A terrific whodunit!”
—Jenn McKinlay, New York Times bestselling author of the Cupcake Bakery mysteries

Leslie Karst has degrees in English literature, law, and culinary arts. After graduating from Stanford Law School, she worked for twenty years as a research and appellate attorney before retiring. Karst now spends her time cooking, gardening, cycling, singing alto in the local community chorus, and of course writing. She and her wife, Robin, and their Jack Russell mix, Ziggy, split their time between Santa Cruz, CA and Hilo, HI.
Loading...
or
Not Currently Available for Direct Purchase