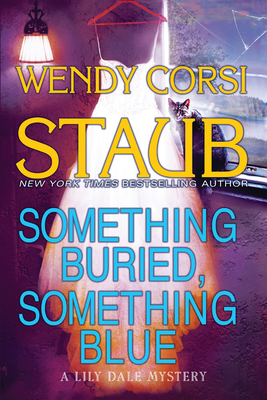 New York Times bestselling author Wendy Corsi Staub is back with the second in her critically-acclaimed cozy mystery series.

After agreeing to stay in Lily Dale through the winter as caretakers of the Valley View Guesthouse and its feline residents, widowed mom Bella Jordan and her son Max are looking forward to the peaceful off-season after a hectic summer. That is until the medium next door, Odelia Lauder, recruits Bella to host a destination wedding for the world's most petulant bride, Johneen Maynard, a friend of Odelia's granddaughter.

Things take an even more stressful turn as the wedding day looms amidst an October blizzard, when suddenly the Spirits start giving Odelia a major heads up that the bride might be fated for death. And if there's any truth to her premonitions, the wedding is off—and that's the least of their problems.

It's a race to figure out who would want to kill Johneen before her attacker has a chance to strike in Something Buried, Something Blue.

Praise for Something Buried, Something Blue:
“A touch of the paranormal, a hint of romance, and a sweet and sympathetic protagonist will lure readers to enchanting Lily Dale again and again.”
—Publishers Weekly

"Charming... Anyone who enjoys Nancy Atherton's "Aunt Dimity" mysteries will be drawn to this cozy."
—Library Journal

Praise for the Nine Lives:
“[A] charming series launch...[Staub] introduces a host of warmly appealing characters and throws in a touch of the otherworldly. Recommend for readers who enjoy the TV show Charmed.”
—Library Journal

"Best-selling author Staub takes readers...on a spooky journey into the unknown while lightening the mood by weaving in sweet, heartfelt, hopeful moments."
—Booklist

"Wendy Corsi Staub’s writing sparkles and the book fairly crackles with suspense. Her characterizations are spot on and you are sucked in from page one...If you’re looking for a different type of cozy, then this one’s for you!"
—Night Owl Reviews, Top Pick

"Wendy Corsi Staub's Nine Lives hooked me from page one. In fact I didn't want to put it down: with warm characters, an intriguing setting and just a touch of the unexplainable it's a thoroughly satisfying read.
—Rhys Bowen, New York Times bestselling author of the Molly Murphy and Royal Spyness mysteries

“I loved visiting Corsi Staub's magical world, cover to cover, and can't wait for the next in the series.”
—Juliet Blackwell, New York Times bestselling author of Give Up the Ghost

“Wendy Corsi Staub weaves a spectacular tale of suspense ... Lily Dale would definitely be on my must visit list. It’s an appropriately quirky town with an even quirkier cast of characters—and a cat, Chance, who’s adept at pulling Houdini acts. Who could ask for anything more? Definitely a must read.”
—T. C. LoTempio, national bestselling author of the Nick and Nora mysteries

"When it comes to mysteries of the home and hearth, Wendy Corsi Staub is unrivaled. Just when you think you've figured her out...think again!"
—John Valeri, Hartford Book Examiner

New York Times and USA Today bestseller Wendy Corsi Staub is the award-winning author of more than eighty novels and has twice been nominated for the Mary Higgins Clark Award. She lives in the New York City suburbs with her husband, their two sons, and a pair of rescued stray cats named Chance and Li’l Chap. This is her second Lily Dale mystery after Nine Lives.
Loading...
or support indie stores by buying on
(This book is on backorder)