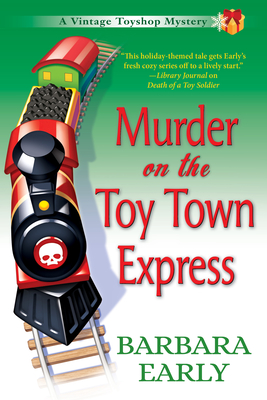 Murder on the Toy Town Express

Liz McCall has come to love running her father’s vintage toyshop back home in East Aurora, NY, so when the Train and Toy Show comes to town, she’s all aboard for a fun toy-filled weekend. The only hitch is that her childhood bully Craig McFadden, now local business rival, has set up a booth next to hers. But the fun and games are over when Craig falls from the ceiling in a publicity stunt gone wrong.

What was initially thought to be a fatal accident proves much more sinister. Pulled into the case by her feelings for both Ken, the police chief, and Jack, her high school sweetheart whose brother is one the prime suspects, Liz dives headfirst into the investigation. But as she digs deeper, she’s shocked to learn her father may have been the intended target.

The trouble train is barreling down and Liz may have just bought herself a first class ticket in Murder on the Toy Town Express, Barbara Early’s delightful second installment in her Vintage Toyshop mysteries.

Praise For Murder on the Toy Town Express: A Vintage Toy Shop Mystery…

Praise for Murder on the Toy Town Express:
"Worth a read...droll."
—Marilyn Stasio, The New York Times Book Review

Praise for Death of a Toy Soldier:“Delightful...The cozy hometown setting and a lovable cast of characters add to the story’s charm.”
— Kate Carlisle, New York Times bestselling author of the Bibliophile mysteries

Barbara Early earned an engineering degree, but after four years of doing nothing but math, developed a sudden allergy to the subject and decided to choose another occupation. Before she settled on murdering fictional people, she was a secretary, a school teacher, a pastor’s wife, and an amateur puppeteer. After several years living elsewhere, she and her husband moved back to her native Western New York State, where she enjoys cooking, crafts, classic movies and campy seventies television, board games, and posting pictures of her four cats on Facebook. This is her fourth mystery, and the second in her Vintage Toyshop series.
Loading...
or support indie stores by buying on