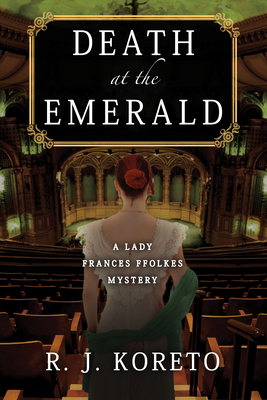 Death at the Emerald (A Lady Frances Ffolkes Mystery #3)

One-named stunning actress Helen mysteriously vanished 30 years ago. An elderly family friend is unable to bear not knowing any longer and commissions Lady Frances Ffolkes to track her down. Taking on the role of Lady Sherlock, with her loyal maid Mallow drafted as her Watson, Frances finds herself immersed in the glamorous world of Edwardian theater and London’s latest craze—motion pictures.

As Frances and Mallow make their way through the theaters, they meet colorful figures such as George Bernard Shaw and King Edward II. Tracking the theaters seems like a dead end. That is until one of Helen’s old suitors is suddenly murdered. With the stakes raised, Frances and Mallow work quickly to uncover a box of subtle clues to Helen’s whereabouts. But someone unexpected wants that box just as badly and is willing to kill to keep it shut.

The stage is set for murder and Frances and Mallow are determined to unravel the decades-old conspiracy in Death at the Emerald, R. J. Koreto’s third installment in the captivating Lady Frances Ffolkes mysteries.

Praise for Death at the Emerald:
"An intriguing series."
—Deadly Pleasures

"Engaging...A good bet for fans of Rhys Bowen and Kate Saunders and for lovers of Downton Abbey."
—Library Journal

“Beautifully appointed and written with measured authority...A reprinting of an authentic novel from the early 20th century.”
—Kirkus Reviews

“R. J. Koreto does not disappoint in the third novel in this series, and we look forward to many more adventures with Lady Frances and Miss Mallow.”
—Manhattan Book Review

“Koreto skillfully contrasts the feminist milieu of 1907 England with the establishment class structure. Lady Frances and Mallow are an effective pairing.”
—Booklist

“The character dialogue is fantastic. The female leads are simply wonderful...I can tell the writer loves this time period, as he handles the era’s mannerisms and conventions masterfully. All in all, this is a delightful read.”
—Historical Novels Review

"A charming Edwardian mystery with a delightfully unconventional heroine...Fans of Rhys Bowen, Charles Todd and Jacqueline Winspear are sure to enjoy."
—Shelf Awareness

“A very enjoyable series...Koreto has definitely made a mark in the writing world: He is a superb writer of the beloved upstairs/downstairs mystery.”
—Suspense Magazine

“Is Lady Frances Ffolkes going to be the next hot new thing? I certainly hope so...Here’s to a new cozy heroine to add to your must-read list...May she and her creator march to success.”
—BookReporter

Like his heroine, Frances Ffolkes, R. J. Koreto is a graduate of Vassar College. He has spent most of his career as a financial journalist. He is a member of Mystery Writers of America, and his work has appeared in Ellery Queen’s Mystery Magazine. He lives in New York, NY. This is his third Lady Frances historical mystery following Death Among Rubies.
Loading...
or
Not Currently Available for Direct Purchase