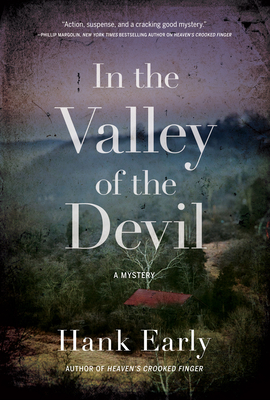 In the Valley of the Devil

Private investigator Earl Marcus thought he’d conquered his demons after vanquishing the malevolent spirit of his fundamentalist preacher father—but now, he must face something much more terrifying than the devil he knew.

Earl Marcus found new hope after confronting the unspeakable evil unleashed by his father’s fundamentalist Church of the Holy Flame. Now plying his trade as a private investigator in the North Georgia mountains, he’s drawn once again into a dark abyss of depravity, and murder.

Tasked with what seems like a routine job, Earl stumbles into a mysterious cornfield where an old mountain legend appears to have awakened. Just as he begins to hear rumors of a place in the woods behind a dark cornfield where a killer collects human skulls, his partner Mary Hawkins vanishes.

As the litany of terror grows, the poisoned spirits of Earl’s past return to claim their final victims. And on an old train trestle over a swift-running river at the edge of a cornfield Earl will confront his worst fears. Time is running out for Mary—and unless Earl can wrest her from the control of a secretive cabal comprised of some of the area’s most elite—and wealthiest—citizens, she could be lost to him forever in In the Valley of the Devil, the second harrowing installment of the Earl Marcus mysteries by Hank Early.

Praise For In the Valley of the Devil: An Earl Marcus Mystery…

Praise for In the Valley of the Devil:
“Dan Brown’s fans should enjoy the mixing of supernatural and thriller elements here; those who favor southern mysteries with gothic elements will be another audience.”
—Booklist

“With In the Valley of the Devil, Early cements his position as one of the most innovative voices in mystery and proves he’s an author who isn’t afraid to tackle important issues without sounding preachy or compromising entertainment.”
—Criminal Element

"A storyline that will make the heart pump faster with its intensity...In the Valley of the Devil will appeal to anyone who likes the hardboiled Southern private eye novel where evil lurks beneath the surface of a quiet little town."
—NY Journal of Books

"Hank Early pens rural noir with the best of them, and his protagonist, Earl Marcus, is a worthy addition to the canon of hard-as-bark detectives."
—Laird Barron, author of Blood Standard

"Can the dead come back to life?...Heaven’s Crooked Finger has action, suspense and a cracking good mystery."
—Phillip Margolin, New York Times bestselling author of Violent Crimes and The Third Victim

“From the opening pages of this book, you know you’re in the hands of a rare talent. Hank Early has penned a fast-paced, thought provoking, and thoroughly satisfying southern mystery. Heaven’s Crooked Finger is a truly astonishing debut, and one of the best rural mysteries I’ve ever read.”
—John Rector, Wall Street Journal bestselling author of The Ridge, Already Gone, and The Cold Kiss

“Atmospheric...Readers with a taste for raw, intense mysteries will be rewarded.”
—Publishers Weekly

“Gritty and riveting...Distinct pacing, a redolent sense of place, and striking characters. The mystery is suspenseful and action packed. Fans of James Lee Burke and John Hart will want to take note.”
—Library Journal

“Powerful and profound... Heaven’s Crooked Finger is an outstanding work of literary suspense, a tale as devastatingly beautiful as it is powerfully intelligent...Remarkable.”
—NY Journal of Books

"With Heaven’s Crooked Finger, Hank Early has not only written one of the very best novels I’ve read this year, but also introduced me to my favorite new mystery detective, Earl Marcus. This book is an expert mixture of action, suspense, and compelling characterization that easily establishes Early as a literary force of nature. From the first page, the tension of the Marcus family’s impact on their small town, and the threat that poses to Earl, builds like a charge in the atmosphere, present and deadly threatening, leading to an ending that is electric. Heaven’s Crooked Finger is going to be on a lot of Best of 2017 lists."
—Bracken MacLeod, Bram Stoker Award-nominated author of Stranded and Come to Dust

"The novel’s rapid pace hurries toward a conclusion that is surprisingly unexpected...A solid foundation for a new crime series."
—Foreword Reviews

“Riveting...A humdinger of a story told with a fresh voice and more than a lick of understanding.”
—Bookpage

“A Southern Gothic detective story that will long leave readers catching their breath. This one leaves a mark. Early writes like kudzu: The seed drops in the first chapters. The reader should run, lest they soon find themselves entangled, unable to wrest themselves free.”
—Eryk Pruitt, author of Dirtbags, Hashtag, and What We Reckon

Hank Early is a middle school teacher and writer located in Central Alabama. He enjoys good beer, strong coffee, and wild storms. He’s married and has two kids who are constantly giving him ideas for his next novel. This is his second Earl Marcus mystery.
Loading...
or
Not Currently Available for Direct Purchase