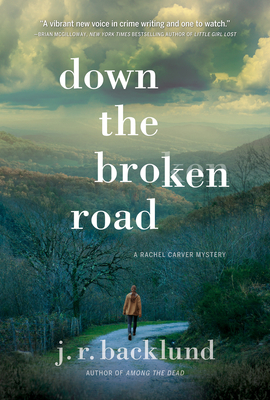 Down the Broken Road

Ex-SBI agent Rachel Carver’s past comes back to haunt her as she uncovers a trail of murderous revenge—and a horrifying secret.

Rachel Carver’s career with the North Carolina Bureau of Investigation came to a shuddering halt after her last case led to the collateral death of an innocent woman and a shameful cover-up by her superiors. She’s turned in her badge and is settling in to a new life as a legal investigator—but Rachel’s past won’t leave her alone.

An anonymous tip leads her to investigate a possible link between a recent grizzly murder and the case that ruined her career. With a new set of clues to run down, Rachel is determined to uncover the truth once and for all. But the killer strikes again, and in a flurry of confusion, Rachel gets pinned for a double homicide.

On the run and desperate for answers, she peels back the layers of the victims’ lives—and discovers a shocking litany of murder and lies that now threatens to claim even more victims. Even if Rachel can prove her innocence, she might not be able to save her own life in Down the Broken Road, the second pulse-pounding novel in J. R. Backlund’s Rachel Carver mysteries.

Praise For Down the Broken Road: A Rachel Carver Mystery…

Praise for Down the Broken Road:
"Readers who admire strong female leads will want to see more of the intriguing Carver."
—Publishers Weekly

"Backlund’s kick-ass heroine is just the person to clear up her own mistakes if she can only stay ahead of a dangerous conspiracy."
—Kirkus Reviews

“This compelling series will have fans of Alafair Burke and Karin Slaughter delighted to follow another such female protagonist.”
—Booklist

“Backlund deftly handles character development and sprinkles in enough details to make this story and the people in it come alive on the page.”
—NY Journal of Books

While J. R. Backlund’s heart resides in North Carolina, where he was born, his parents transplanted him to the Sunshine State before he was old enough to put up a fight. Prior to writing his first novel, he studied journalism at the University of Florida, then took a thirteen-year detour in construction management before getting back to telling stories. He lives in Jacksonville with his wife and their three furry children—they don’t like it when he calls them dogs.
Loading...
or
Not Currently Available for Direct Purchase