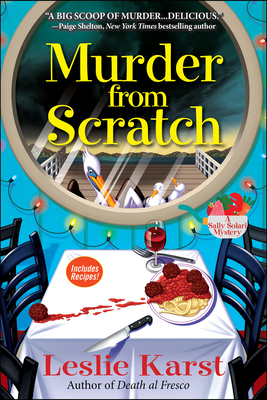 Restaurateur Sally Solari’s cousin Evelyn may be blind, but she can see all too clearly that her chef mother’s death wasn’t an accidental overdose—she was murdered.

Santa Cruz restaurateur Sally Solari’s life is already boiling over as she deals with irate cooks and other staffing issues at the busy Gauguin restaurant. The rainy December weather isn’t cooling things down, either. So she’s steamed when her dad persuades her to take in Evelyn, her estranged blind cousin whose mother has just died of a drug overdose.

But Evelyn proves to be lots of fun and she’s a terrific cook. Back at the house she’d shared with her mom, Evelyn’s heightened sense of touch tells her that various objects—a bottle of cranberry juice, her grandfather’s jazz records—are out of place. She and her mom always kept things in the same place so Evelyn could find them. So she suspects that her mother’s death was neither accident nor suicide, no matter what the police believe.

The cousins’ sleuthing takes Sally and Evelyn into the world of macho commercial kitchens, and the cutthroat competitiveness that can flame up between chefs. In Leslie Karst’s scrumptious fourth Sally Solari mystery, Sally will have to chop a long list of suspects down to size or end up getting burned.

Praise For Murder from Scratch: A Sally Solari Mystery…

"Interesting characters and an easy to read mystery that is fun. [I] look forward to the next adventure from author Leslie Karst."
—Red Carpet Crash

"Foodies and fans of cozy mysteries will both love the latest installment in Karst’s series...With this intricately plotted mystery, Karst draws the reader further into Sally’s engaging and often amusing world."
—Booklist

“I enjoy Sally and her family...Readers will look forward to seeing what’s next.”
—Kings River Life

“Highly recommend reading...There is so much to love and tasty recipes at the end of the book to try.”
—Cozy Mystery Book Reviews

“Cheers for Leslie Karst for her inventive mind and strong skills as a writer. This cozy is a pleasure.”
—Reviewing the Evidence

Praise for the Sally Solari mysteries:
“Intricate plotting and complex characterization in a sparkling setting on the coast of California...At turns poignant and precarious, this story captivates all the way to the very last page...Terrific!”
—Jenn McKinlay, New York Times bestselling author

“A pinch of poison, a dash of family, a big helping of the restaurant life, and a big scoop of murder...Delicious.”
—Paige Shelton, New York Times bestselling author

“A bright, fresh take on the traditional mystery, richly steeped in the local food and restaurant culture of northern California. Karst combines a twisty mystery with an original set of lively characters and a deep sense of place.”
—Bailey Cates, New York Times bestselling author of the Magical Bakery mysteries

“[A] delicious plate of mystery...Don’t read while hungry!”
—Edith Maxwell, Agatha-nominated and bestselling author of the Local Food mysteries

“Promising...A delicious blend of humor and intrigue, with a warm and friendly cast of characters that will leave readers feeling right at home. Karst’s writing is bright and refreshing, spiced just right and tasty enough to leave the reader hungry for more.”
—Jacklyn Brady, national bestselling author of the Piece of Cake mysteries

“A tasty combination of culinary tidbits, an unusual motive for murder, and appended recipes for ambitious cooks.”
—Kirkus Reviews

“Sympathetic characters, family dynamics, fast paced action, and vivid food descriptions combine to make this an entertaining read. It made me want to head straight to the kitchen and cook up a batch of pasta.”
—Isis Crawford, author of the Catered mysteries

Leslie Karst has degrees in English literature, law, and culinary arts. After graduating from Stanford Law School, she worked for twenty years as a research and appellate attorney before retiring. Karst now splits her time between Santa Cruz, CA, and Hilo, HI, passing the days cooking, gardening, cycling, singing alto in the local community chorus, and of course writing.
Loading...
or support indie stores by buying on
(This book is on backorder)