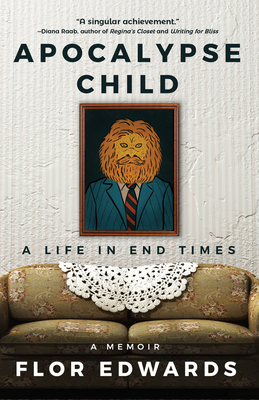 A Life in End Times

For the first thirteen years of her life, Flor Edwards grew up in the Children of God. The group's nomadic existence was based on the belief that, as God's chosen people, they would be saved in the impending apocalypse that would envelop the rest of the world in 1993. Flor would be thirteen years old. The group's charismatic leader, Father David, kept the family on the move, from Los Angeles to Bangkok to Chicago, where they would eventually disband, leaving Flor to make sense of the foreign world of mainstream society around her. Apocalypse Child is a cathartic journey through Flor's memories of growing up within a group with unconventional views on education, religion, and sex. Whimsically referring to herself as a real life Kimmy Schmidt, Edwards's clear-eyed memoir is a story of survival in a childhood lived on the fringes.

Flor Edwards is an author and lives in Los Angeles, California. By age twelve, Flor had lived in 24 different locations across three continents. Always on the move to escape the Antichrist and in preparation for the Apocalypse in 1993, her nomadic childhood prompted her to pen her forthcoming memoir Apocalypse Child. In her debut memoir, Flor movingly describes her early life growing up with her family and eleven siblings as a member of The Children of God, a controversial religious movement that many describe as an apocalyptic cult.In 2011, Flor graduated with a BA in Print Journalism. Then she earned her MFA in Creative Writing. She has taught writing at UC Riverside and Santa Monica College. Her debut memoir Apocalypse Child is set for release by Turner Publishing Company on March 13, 2018.
Loading...
or support indie stores by buying on