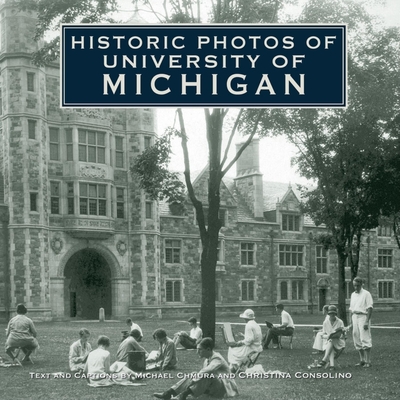 Historic Photos of University of Michigan

Founded in Detroit, Michigan, in 1817 as one of the first public universities in the nation, the University of Michigan moved to Ann Arbor in 1837. What started as a forty-acre campus with four buildings, expanded over the next 170 years to become a university with four campuses: Central, Athletic, Medical and North. It has become one of the most distinguished universities in the world.

Historic Photos of the University of Michigan depicts the unfolding history of the college in Ann Arbor from its early stages in the 1850s to its more modern self of the late 1970s. Exceptional black and white images of the campus and surrounding area, selected from the Bentley Historical Library's extensive collection, provide a taste of campus life while taking readers through the evolution of buildings, the beginning of an athletic legend, and the historic events that united the campus with a community. These photographs--many rarely seen--portray the richness that forms the proud history of the University of Michigan.