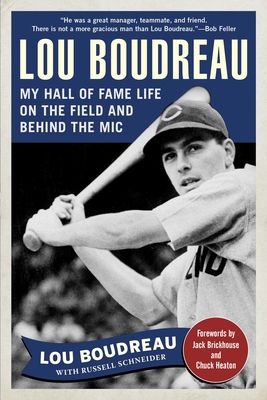 The autobiography of a baseball great.

Lou Boudreau is considered one of the most extraordinary men in baseball history. He was a player-manager, an All Star, an MVP, a World Series–winner, and a Hall of Famer. But that only scratches the surface of “The Good Kid.” In Lou Boudreau: Covering All the Bases, hear from his own words the personal story of a boy from Harvey, Illinois, and how he took the sport of baseball my storm.

In 1942, at only twenty-four years of age and with less than three full seasons in the major leagues, Boudreau was named as the team’s next manager. He took the role seriously, and made sure to always lead by example. Lou also shares stories of playing with and managing Cleveland’s first African American players, Larry Doby and Satchel Paige, and of winning the 1944 American League Batting Championship with a hit in his final at bat of the season. But the highlight of Lou’s career came in 1948, when he used his bat, glove, and coaching skills to lead the Indians to a World Series victory, while becoming the only player-manager ever to win the American League MVP award.

Retiring as a ballplayer in 1952, Boudreau coached for eight more seasons before finally walking away from the field in 1960. He then began his second career as a broadcaster, and was the “Voice of the Chicago Cubs” for almost thirty years.

On August 10, 2001, Lou Boudreau passed away at the age of eighty-four. Enshrined in the National Baseball Hall of Fame, “The Good Kid” will always be remembered for what he did both on and off the field. As former teammate and Hall of Famer Bob Feller once said, “He was a great manager, teammate, and friend. There is not a more gracious man than Lou Boudreau.”

Lou Boudreau is known as one of the greatest baseball players of all time. A seven-time All-Star, Boudreau was the player-manager for the 1948 Cleveland Indians, leading them to a World Series victory while earning MVP honors. Elected to the National Baseball Hall of Fame in 1970, Boudreau passed away on August 10, 2001.

Russell Schneider was a sportswriter and columnist for the Cleveland Plain Dealer for more than thirty years before becoming a freelance writer. He covered the Indians on a daily basis for fourteen years, from 1964 to 1977. Schneider is the author of several books, including The Cleveland Indians Encyclopedia, Amazing Tales from the Cleveland Indians Dugout, and The Boy of the Summer of ’48.

Jack Brickhouse is a Hall of Fame broadcaster, most known for being the play-by-play announcer for the Chicago Cubs from 1948–81. He received the Ford C. Frick Award in 1983, presented annually by the National Baseball Hall of Fame to a broadcaster for “major contributions to baseball.” He passed away in 1998, at the age of eighty-two.

Chuck Heaton was a sports columnist who spent fifty years at the Cleveland Plain Dealer. Upon his passing in 2008, the Press Club of Cleveland established the annual Chuck Heaton Award, bestowed upon the journalist who best exemplifies the sensitivity and humility that, along with his journalism heart, were traits exhibited by Chuck Heaton during his exemplary career as a sports writer at the Plain Dealer.
or
Not Currently Available for Direct Purchase
Copyright © 2020 American Booksellers Association