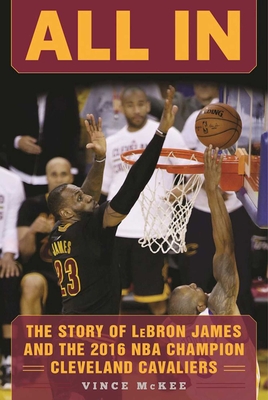 The Cleveland Cavaliers franchise has been in existence for more than forty-five years, and it hasn’t been an easy ride for the team or their fans, with many ups and downs along the way. They had seen the “Miracle in Richfield” in 1976, “The Shot” by Michael Jordan to knock them out of the playoffs in 1989, the arrival of “The Chosen One,” LeBron James, in 2003, and a trip to the NBA Finals in 2007, but never a title.

All In: The Story of LeBron James and the 2016 NBA Champion Cleveland Cavaliers takes readers on the rollercoaster ride from LeBron coming back to Cleveland, to their 2015 NBA Finals appearance, through the unforgettable 2015–16 season that gave the city of Cleveland their first major sports championship in fifty-two years. Author Vince McKee brings to life all the drama on and off the court, including how the team was built, why coach David Blatt was fired and replaced by Tyronn Lue midway through the season, and every big game and play along the way, straight through to the dramatic 2016 NBA Finals and epic comeback against the seemingly unbeatable Golden State Warriors.

LeBron James finally earned his long-awaited redemption, Kevin Love made his presence felt under the boards, Kyrie Irving took to the NBA’s biggest stage and made it his own under the brightest of lights, and J. R. Smith, Tristan Thompson, Richard Jefferson, and Iman Shumpert all made key contributions. All In is a must-have for all Cleveland sports fans!

Vince McKee is among the top sports writers in Northeast Ohio. He is the author of eight books on Cleveland sports, along with his duties as senior VP of sponsorship with NeoSportsInsiders.com. His work has been featured on ESPN television and in SLAM magazine, along with Drennan Live and the Cleveland Plain Dealer. McKee lives in North Olmsted, Ohio, with his daughter Maggie and wife Emily.
Loading...
or
Not Currently Available for Direct Purchase