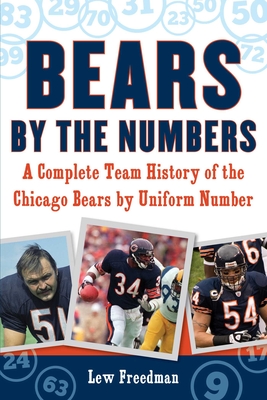 Bears by the Numbers

A Complete Team History of the Chicago Bears by Uniform Number

For Chicago Bears fans, anyone who ever wore the uniform is like family. Bears by the Numbers reintroduces readers to some of their long-lost ancestors, even those they think they already know.

What do Al Campana, Frank Dempsey, Stan Wallace, Don Mullins, Gale Sayers, and Steve Trimble all have in common? They all wore number 40 for the Chicago Bears, even though more than four decades passed between the last time Campana last pulled on his jersey and the number was retired for Sayers in 1994 (along with 51 for Dick Butkus).

Since the Chicago Bears first adopted uniform numbers in 1932, the team has handed out only 99 numbers to more than 1,000 players. That’s a lot of overlap. It also makes for a lot of good stories. Bears by the Numbers tells those stories for every Bear since ’32, from Red Grange to Pernell McPhee.

This book lists the players alphabetically and by number; these biographies help trace the history of one of football’s oldest and most beloved teams in a new way.