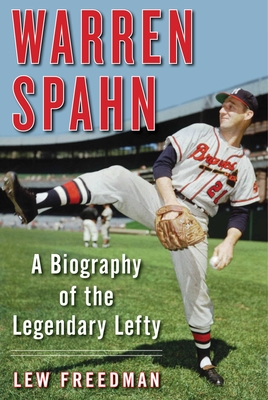 A Biography of the Legendary Lefty

With 363 victories, Warren Spahn is the winningest lefty in baseball history. Over 21 years, he won 20 or more games 13 times, was a 17-time All Star, won a Cy Young–award, then, of course, was elected to the National Baseball Hall of Fame. Spahn was also a war hero, serving in World War II and awarded the Purple Heart.

To say Spahn lived a storied life is an understatement.

In Warren Spahn, author Lew Freedman tells the story of this incredible lefty. Known for his supremely high leg kick, Spahn became one of the greatest pitchers in baseball history. However, the road wasn’t as easy as it would seem.

Struggling in his major-league debut at age twenty, manager Casey Stengel demoted the young left. It would be four years before Spahn would return to the diamond, as he received a calling of a different kind—one from his country.

Enlisting in the Army, Spahn would serve with distinction, seeing action in the Battle of the Bulge and the Ludendorff Bridge, and was awarded a battlefield commission, along with a Purple Heart.

Upon his return to the game, he would take the league by storm. Spahn dominated for over two decades, spending twenty years with the Braves (both Boston and Milwaukee), as well as a season with the New York Mets and San Francisco Giants. Pitching into his mid-forties, he would throw two no-hitters at the advanced ages of thirty-nine and forty.

From his early days in Buffalo and young career, through his time and the military and all the way to the 1948 Braves and “Spahn and Sain and Pray for Rain,” author Lew Freedman leaves no stone unturned in sharing the incredible life of this pitching icon, who is still considered the greatest left-handed pitcher to ever play the game.

Praise For Warren Spahn: A Biography of the Legendary Lefty…