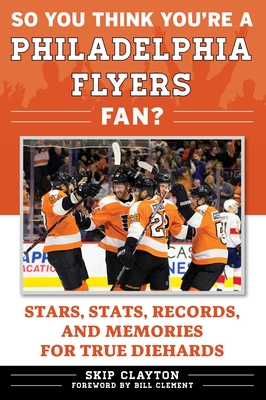 So You Think You're a Philadelphia Flyers Fan?

Stars, Stats, Records, and Memories for True Diehards (So You Think You're a Team Fan)

So You Think You’re a Philadelphia Flyers Fan? tests and expands your knowledge of Flyers hockey. Rather than merely posing questions and providing answers, it will give you the details behind each—stories that bring to life players and coaches, games and seasons.

This book is divided into multiple parts, with progressively more difficult questions in each new section. Along the way, you’ll learn more about the great Flyers players and coaches of the past and present, from Bobby Clarke to Bernie Parent, Bill Barber, Fred Shero, Rick MacLeish, Brian Propp, Mike Keenan, Mark Howe, Tim Kerr, Ron Hextall, Eric Desjardins, Jeremy Roenick, Chris Pronger, Eric Lindros, Mark Recchi, Simon Gagne, Wayne Simmonds, and so many more. Some of the many questions that this book answers include:

• What goalie recorded the first shutout in team history?

• Which former Flyers coach later won a Stanley Cup for another team?

• Who scored the very first regular-season overtime goal for the Flyers?

• What opponent went forty-two games without beating the Flyers at the Spectrum?

This book makes the perfect gift for any fan of the Fly Guys!

Skip Clayton hosts Racing Wrap, a weekly one-hour radio show on WBCB Levittown, Pennsylvania, and has covered sports for the ABC Radio Network for over forty years. Clayton is also the author of Philadelphia’s Big Five and coauthor of Tales from the Miami Dolphins Sideline and 50 Phabulous Phillies. He resides in Sellersville, Pennsylvania, with his wife, Joanne.

Bill Clement played 11 seasons as a center in the National Hockey League and was a member of the Flyers' Stanley Cup-winning teams in 1974 and 1975. He is currently a color analyst for NBC Sports Philadelphia.
Loading...
or
Not Currently Available for Direct Purchase