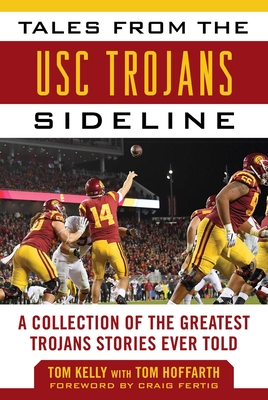 Tales from the USC Trojans Sideline

Tom Kelly, the legendary signature voice of USC sports for nearly five decades, combines with coauthor Tom Hoffarth of the Daily News of Los Angeles to take Trojan fans on a journey of memories and previously untold anecdotes from and about many of the great coaches, players, teams, and games in USC football history, as well as other sports.

His story in Southern California starts with the recommendation of Jack Buck that he be hired as Chick Hearn’s color man on USC football and basketball games in 1961. During Kelly’s forty-plus year run, the Trojans boasted five Heisman Trophy winners, won five national championships, and played in 14 Rose Bowls and 24 overall bowl games. Kelly, who won five Golden Mike Awards and was named California’s Sportscaster of the Year three times, was inducted into USC’s Hall of Fame in 2001.

With an introduction that touches on the Trojans’ drive toward a hoped-for twelfth national championship, Tom Kelly’s book includes stories and anecdotes that are sure to become a must-read for all USC fans.

Tom Hoffarth, a USC graduate and former assistant sports editor for the Daily Trojan, covers sports media for the Los Angeles Daily News, where he has worked since 1992.
Loading...
or
Not Currently Available for Direct Purchase