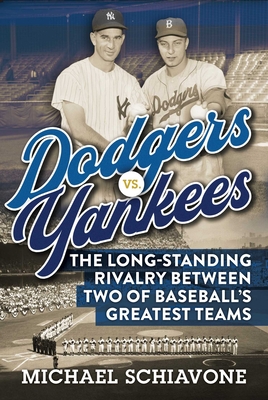 The Long-Standing Rivalry Between Two of Baseball's Greatest Teams

A History of the Epic Rivalry between Two of Baseball's Powerhouses that Has Spanned Over Eighty Years—from Ebbets Field to Dodger Stadium, from Babe Ruth to Reggie Jackson

The Los Angeles Dodgers and New York Yankees are two of the most storied and popular teams in not only baseball, but all of sports. Their rivalry began in New York and continued with the Dodgers leaving Brooklyn and moving to sunny California. The two teams have even met in the World Series a record eleven times! For a long time, the Dodgers-Yankees rivalry was the marquee match-up in baseball. For as good as the Dodgers were, the Yankees were almost always better.

But why were the Yankees so much better than the Dodgers? Were the Dodgers “chokers” when it mattered most? Or was it simply the case that the baseball gods favored the team that would be later known to its detractors as the “Evil Empire” over the boys in blue?

From Don Larsen’s perfect game in the 1956 World Series, Jackie Robinson’s famous steal of home in the 1955 Series, or Reggie Jackson’s three-home-run game in the 1977 Series, Dodgers vs. Yankees provides a history of this rivalry—from their first World Series match-up in 1941 until the present day. Every game between the two teams, including inter-league play, is covered as author Michael Schiavone attempts to answer why the Yankees have reigned supreme over the Dodgers.

Whether you’re a fan of the Yankees or Dodgers—both on the East and West Coast—Dodgers vs. Yankees offers the most complete overview and analysis of these team’s timeless rivalry.

Praise For Dodgers vs. Yankees: The Long-Standing Rivalry Between Two of Baseball's Greatest Teams…

"Schiavone writes with a historian's eye for detail and a fan's eye for the dramatic. The Dodgers: 60 Years in Los Angeles is a must-read for not only Dodger fans but for anyone interested in how America's pastime went national."
—Molly Knight, New York Times bestselling author of The Best Team Money Can Buy

"This is an essential read for any fans of this proud MLB franchise."
—Keith Law, senior baseball writer for ESPN and author of Smart Baseball

"Every season is covered in detail, making it the most comprehensive history of the Los Angeles Dodgers on the market. Whether you are a fan from the Brooklyn days or you’re new to Dodger baseball altogether, you will enjoy the often surprising recounts of the early days of LA Dodger baseball as well as the more recent trials and tribulations of the Boys in Blue."
—Stacie Wheeler, Dodgers Digest

"The Dodgers: 60 Years in Los Angeles is a volume worthy of your attention, both for refreshing your memory on Dodgers history and for learning some new things about the team."
—David Young, TrueBlueLA

Michael Schiavone is the author of The Dodgers: 60 Years in Los Angeles. His other books include Sports and Labor in the United States, which was long listed for the 2016 PEN/ESPN Award for Literary Sports Writing, Unions in Crisis? The Future of Organized Labor in America, and Austerity and the Labor Movement. He has a bachelor's degree in International Relations from Flinders University and a PhD from the Australian National University.
Loading...
or
Not Currently Available for Direct Purchase