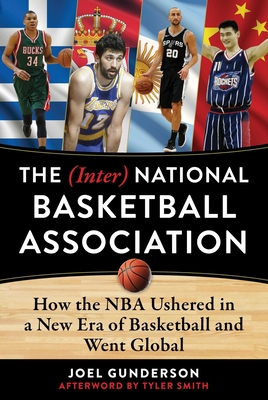 But that’s no longer the case.

Today, a full one-third of those in the league were born overseas. Out are the days of foreign-born players from unknown countries sitting at the end of the bench. Now, they’re the face of the franchise. A lottery draft pick. They are carrying the game into the new millennium.

So the question remains: what brought about this change? How did the skillsets of players born overseas become comparable to those in the states?

In The (Inter) National Basketball Association, author Joel Gunderson explores how the international game has become so integral to the growth of the NBA. It’s not, as former commissioner David Stern described at the 1985 NBA Draft, “America’s Game.” No longer does Team USA expect to steamroll through the Olympics.

With stars such as Giannis Antetokounmpo (Greece), Luka Doncic (Slovenia), Joel Embiid (Cameroon), Kristaps Porzingis (Latvia), and many more, the game of basketball has become a universal language. With almost forty different countries represented in the National Basketball Association today, the evolution of the sport has transcended across international waters. Teams no longer shy away from players born abroad, but instead welcome them with open arms. And for those who come over, not knowing the language, unfamiliar with the American lifestyle, they are now arriving with fluency in the most important language: basketball.

&lt;div&gt;&lt;b&gt;Joel Gunderson&lt;/b&gt; is a freelance writer whose work has appeared on NBC Sports Northwest, the Cauldron at &lt;i&lt;Sports Illustrated&lt;/i&gt;, and the Pac-12 Network. He is a former finalist for the ONPA Sports Feature of the Year Award. Joel currently lives in Portland, Oregon, with his wife and three kids.&lt;/div&gt;
Loading...
or support indie stores by buying on