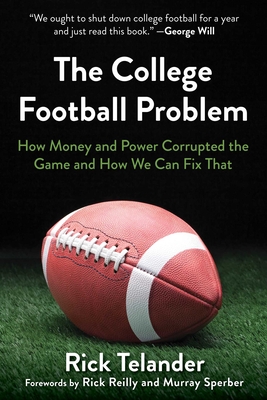 In doing so, Telander was ahead of his time, for the problems that he outlined more than thirty years ago are still relevant today—and in some cases are more severe. In The College Football Problem, a newly revised edition of the 1989 book, Telander reveals that more than thirty years later there still exists the dominance of multimillionaire coaches whose only goal is winning regardless of cost to athletes; the presence of wealthy boosters, board members, and athletic department bigshots who have little regard for the academic side of universities; and, of course, the exploited players themselves—many of whom are impoverished minorities—who too often leave school without degrees or real world working skills but with physical injuries and mental betrayals that often will haunt them for the rest of their lives. Many of these concerns have come to a head in California, where in the Fall of 2019 the governor passed the Fair Pay to Play Act, whereby college athletes can hire  agents to help them with business deals.

With a new foreword by Rick Reilly, this book frames these longtime issues in a new light and offers solutions from Telander in an attempt to put an end to the corruption once and for all.

Praise For The College Football Problem: How Money and Power Corrupted the Game and How We Can Fix That…

"For the many millions of Americans who follow college football, one writer stands out: Rick Telander. He’s the sport’s voice of reason, its journalistic North Star—and he’s back. He was right 30 years ago. He’s still right today."
—Christine Brennan, USA Today columnist, CNN and ABC News commentator, author of Best Seat in the House and the best-selling Inside Edge

"Long before anyone else, Rick Telander wrote about the problems with college football with a prescience and urgency that today seems astonishing. Both as a player at Northwestern and a journalist, he knew both the game and its issues better than just about anyone. The powers that be in college football should have listened then; they'd better listen now."

"The beauty of The Hundred-Yard Lie, is 30 years later, the truths in this book (reissued as The College Football Problem) are more self-evident now as they were then. Rick Telander has found a way to do what many of us trapped in this business have been unable to accomplish: Challenge the system and come out standing on the other side. The return of this book is a testimony of that." — Scoop Jackson, author of The Game Is Not A Game; ESPN columnist

"It’s recently become popular to expose the hypocrisy and inequity of the collegiate sports model, but Rick Telander did it first with The Hundred Yard Lie—and, as it turns out, better than anyone else, with more clarity and heart—for a simple reason: He lived it, both as a player and journalist." — Seth Wickersham, Senior Writer, ESPN

"Everything that happened in college football  since the book's original release—conference realignments, doubling the number of bowl games, adding conference championship and playoff games and the mega-TV deals—proved Rick Telander's point that it's a pseudo-amateur sport, yet his call for proper payment for players remains unacted upon. It's a drum that's still worth banging." —J. A. Adande, director of sports journalism at Medill School, Northwestern University

Rick Telander is a sports columnist for the Chicago Sun-Times and a former senior writer for Sports Illustrated and ESPN: the Magazine. Telander has won the Illinois Sportswriter of the Year Award nine times, and in 2018 he was awarded the Sigma Delta Chi Award for Journalism from the Society of Professional Journalists. He is the author of eight books, including Heaven is a Playground and In the Year of the Bull.
Loading...
or
Not Currently Available for Direct Purchase